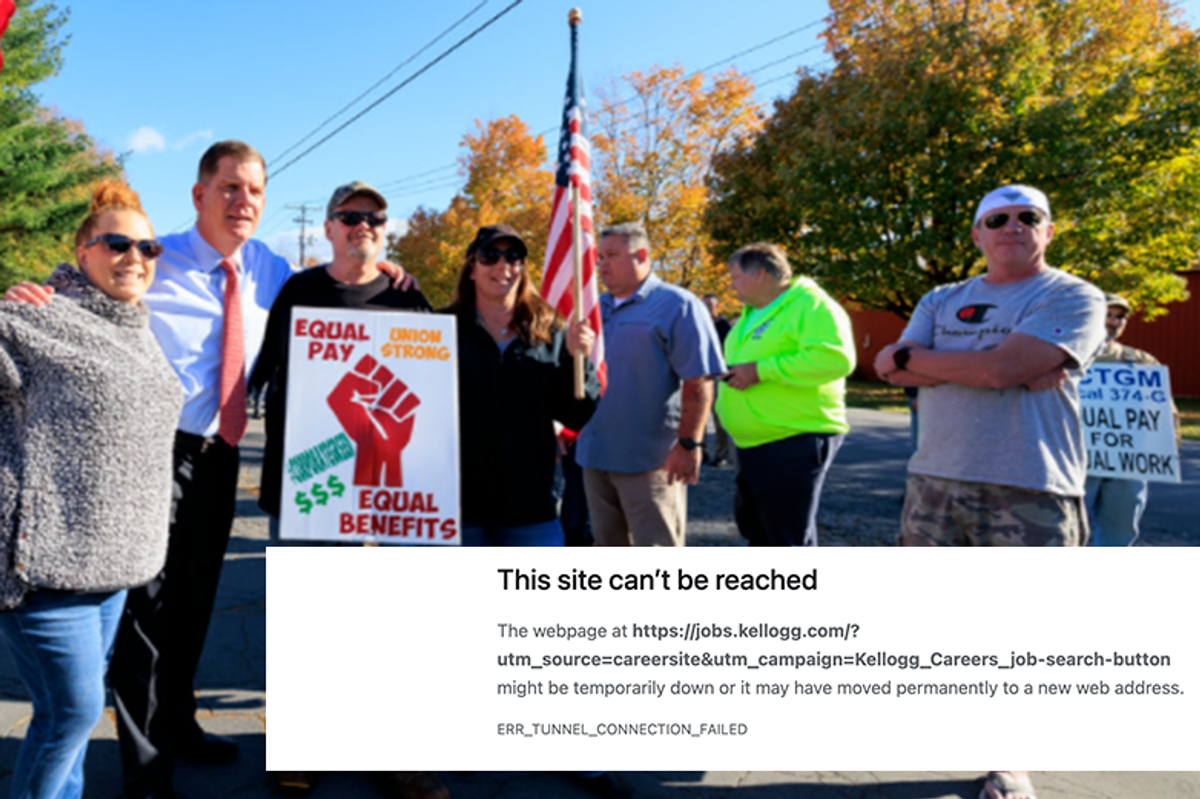 Kellogg replaced many of the striking workers with temporary replacements to keep the factories productive.

Kellogg’s union workers claim they worked an unbelievable average of 72 to 84 hours a week—but the company claims its employees only work 52 to 56 hours a week and that 90% of overtime is voluntary.

“The worst is when you work a seven-to-seven and they tell you to come back at 3 am on a short turnaround,” Omaha Bakery, Confectionery, Tobacco Workers and Grain Millers International Union president Daniel Osborn, a mechanic at the plant, told Rolling Stone. “You work 20, 30 days in a row and you don’t know where work and your life ends and begins.”

On December 5, the union rejected a 3% pay increase that was well below the current rate of inflation.

Workers rejected several contracts before this one, blocking Kelloggu2019s attempt to cut off newer and future employees from attaining full-time pay and benefits.nnVeteran workers told us they wouldnu2019t u201csell our soulsu201d and abandon their younger colleagues.pic.twitter.com/3XJpR1sIIU

On Tuesday, Kellogg announced that the majority of its U.S. workers voted against a new five-year contract and the company would hire replacement workers.

“After 19 negotiation sessions in 2021, and still no deal reached, we will continue to focus on moving forward to operate our business,” Kellogg North America President Chris Hood said in a statement.

The company recently announced more than $4 billion in profits and its CEO Steve Cahillane makes $11 million a year.

Kellogg’s decision to fire its striking union workers has many on social media calling for a boycott.

Please boycott Kelloggs products until they negotiate a fair deal with their workers. @BCTGM just rejected the company’s latest contract in a powerful act of solidarity and commitment to ensuring all Kelloggs workers get the fair pay and dignified working conditions they deserve.https://twitter.com/ninaturner/status/1464411951715565579u00a0u2026

Reddit user BloominFunions came up with a brilliant way to stamp out Kellogg’s attempt to hire new workers by asking followers of the antiwork forum to clog up the company’s jobs portal by inundating it with fake applications.

“The workers at Kellogg’s cereal plants have been striking for fair pay. Kellogg just announced they will hire 1400 permanent replacement scabs to break the strike. And they are accepting applications online!” BloominFunions wrote. “This is your chance to apply for your dream job.”

This is the single image that has stuck with me from the Kelloggu2019s strike. What a twisted, backwards system this is where the people who feed us canu2019t feed their own.pic.twitter.com/8quzltyzog

“Using the job posting links above, submit an application for one or more sites. When you apply, pretend you’re a resident of one of the cities with a Kellogg strike (Omaha, Battle Creek, Lancaster or Memphis),” the Reddit user instructed.

“I’m going to be moving if hired for the position,” Reddit user WrangWei responded to the post. “I was just curious if I would need to live on the street or if I can sleep in my car in the employee parking lot. I won’t be able to get a place for about a year once I move there due to the poverty wages.”

A few hours after the post, Kellogg’s jobs site was reported to be down, although it appears to have come back later in the day.

Just as technology has changed the way people work, it has also empowered the public to fight back against companies it feels are unjust. It’ll be interesting to see whether calls for a boycott and digital sabotage have any effect on Kellogg’s strategy moving forward.

Activists for social justice have effectively used social media to push major corporations to make big changes over the past few years. But will Kellogg bow to public pressure if it means having to fairly compensate its employees?