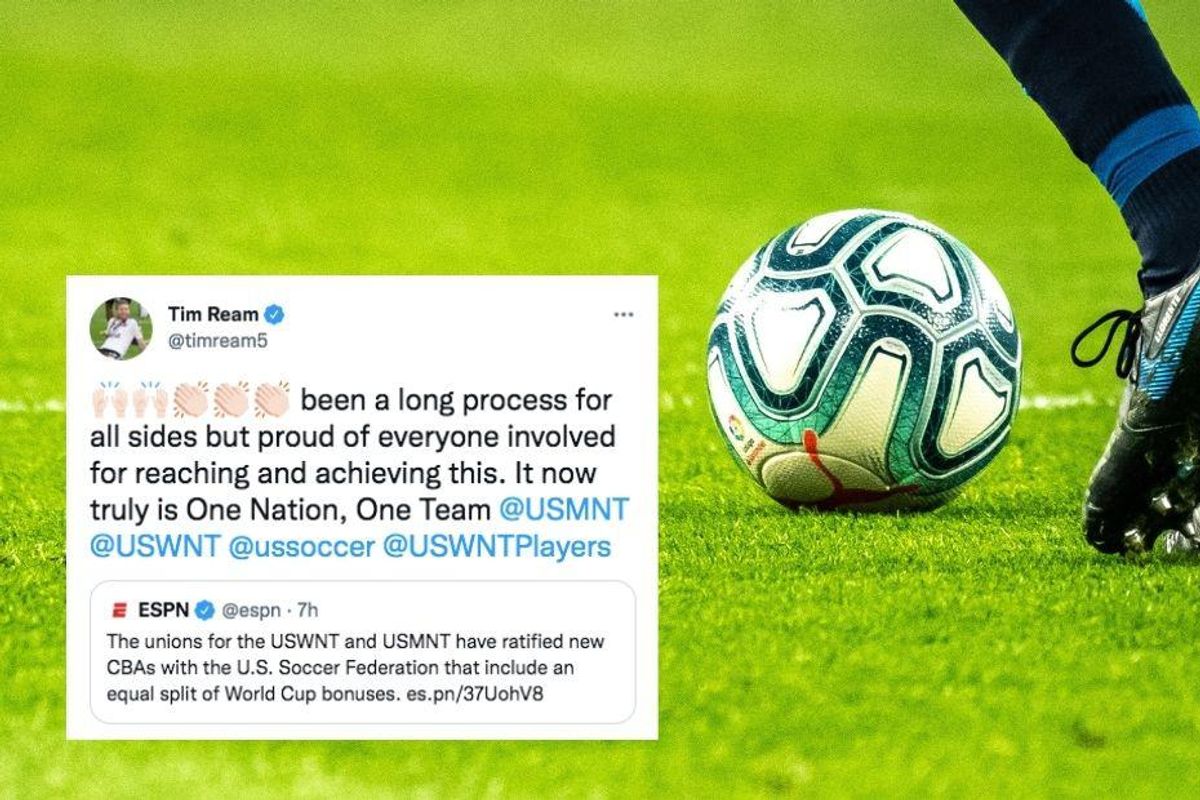 The U.S. men’s national soccer team team, on the other hand, has never won a World Cup and has brought in less game revenue than the women’s team in recent years. And yet, players on the women’s team have continued to get paid thousands of dollars less than their male counterparts. This pay discrepancy resulted in two major lawsuits against the U.S. Soccer Federation, one by five women’s players in 2016 and one by 28 players in 2019.

One of the realities some people used to justify the gap in pay between the men’s and women’s players is that prize money for the men’s World Cup is higher. And not just a little higher—the winner of the men’s World Cup receives a payout nearly 10 times higher than the women’s. That’s not a function of the U.S. soccer program itself, but of the international sport.

There has also been some confusion over pay inequity as the two teams had different collective bargaining agreements that had their pay structures set up differently.

However, the new collective bargaining agreements will close the compensation gap for U.S. players by splitting appearance fees, winnings and bonuses equally between both squads. The U.S Soccer Federation is the first in the world to equalize World Cup prize money between the men’s and women’s teams.

“This is a truly historic moment,” U.S. Soccer President Cindy Parlow Cone said in a statement. “These agreements have changed the game forever here in the United States and have the potential to change the game around the world.”

So perhaps it’s no surprise to see USMNT defender Tim Ream applauding the equal pay agreement on Twitter, writing, “Been a long process for all sides but proud of everyone involved for reaching and achieving this. It now truly is One Nation, One Team.”

been a long process for all sides but proud of everyone involved for reaching and achieving this. It now truly is One Nation, One Team @USMNT @USWNT @ussoccer @USWNTPlayershttps://twitter.com/espn/status/1526904280921276422u00a0u2026

“The accomplishments in this CBA are a testament to the incredible efforts of WNT Players on and off the field. The gains we have been able to achieve are both because of the strong foundation laid by the generations of WNT Players that came before the current team and through our union’s recent collaboration with our counterparts at the USNSTPA [United States National Soccer Team Players Assocation] and leadership at USSF,” she wrote.

“We hope that this Agreement and its historic achievements in not only providing for equal pay but also in improving the training and playing environment for national team players will similarly serve as the foundation for continued growth of women’s soccer both in the United States and abroad.”

A statement from our President on the ratification of a new CBA that achieves equal pay. #ItsAboutTimepic.twitter.com/N7nBLOqaGF

Time will tell how the U.S. agreements impact the sport in the rest of the world, but the U.S. women’s team is leading the way for equal pay for equal work. One more important win for this extraordinary team.