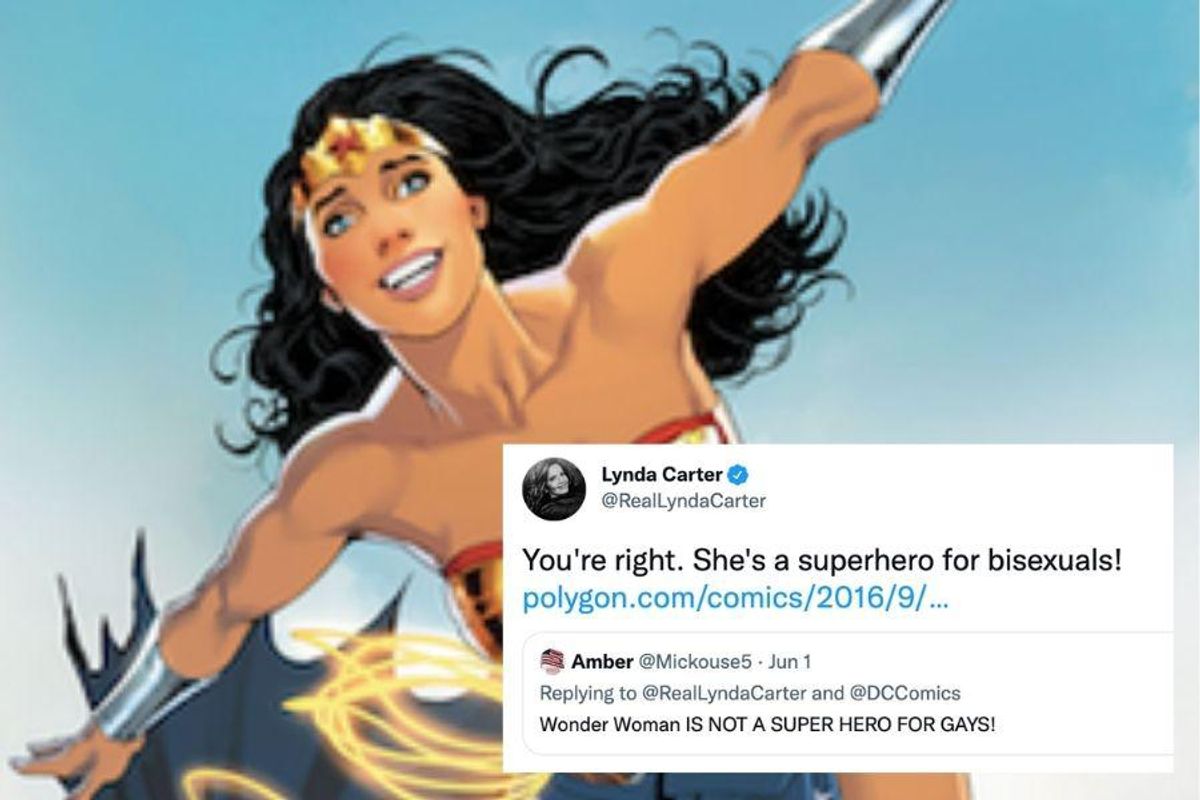 For many, Lynda Carter is the definitive live action Wonder Woman. The actress first brought the comic book heroine to life in the ’70s, and even makes an iconic cameo appearance in the modern-day films starring Gal Gadot. She’s got Wonder Woman action figures made in her likeness, for crying out loud.

All that to say, I think we can feel confident in dubbing Carter a Wonder Woman expert. She’s certainly poured a lot of heart and passion into the role over the years, and fans love her for it.

To kick off Pride Month for 2022, Carter tweeted a variant Wonder Woman comic book cover created by artist Paulina Ganucheau, which was released the previous year. The cover depicts the Amazon warrior smiling while brandishing her signature golden Lasso of Truth in front of a vibrant rainbow backdrop.

Happy Pride! So excited to celebrate with all my LGBTQIA+ friends and fans 🏳️🌈 Art by Paulina Ganucheau for @DCComics ✨ pic.twitter.com/zpPKELsQkp
— Lynda Carter (@RealLyndaCarter) June 1, 2022

The sweet moment was cut rather short after someone commented, in all caps no less, that “Wonder Woman IS NOT A SUPER HERO FOR GAYS.”

In true Wonder Woman fashion, Carter was quick with a defensive comeback.

She attached a 2016 Polygon article where Greg Rucka, a major writer for the contemporary Wonder Woman comics, confirmed that Diana is, without a doubt, canonically queer. He added that considering the entire island of Themyscira where Diana lives was filled with only other Amazons for centuries upon centuries, “it makes no logical sense otherwise.”

Objectively, even the original conception of Wonder Woman had LGBTQ+ roots. When William Moulton Marston created her in 1941, she was inspired by both his wife Elizabeth and their polyamorous partner Olivia Byrne. Their story was depicted in the 2017 film “Professor Marston and the Wonder Women,” starring Luke Evans, Rebecca Hall and Bella Heathcote.

Carter later posted: ‘I didn’t write Wonder Woman, but if you want to argue that she is somehow not a queer or trans icon, then you’re not paying attention.”

She also shared the the importance of keeping the character a queer icon so that others can be empowered to express themselves authentically. “Every time someone comes up to me and says that WW helped them while they were closeted, it reminds me how special the role is,” she wrote.

She then posted a photo from her Wonder Woman TV show days along with the caption: “Love seeing all the love from LGBTQ+ fans today! Now here’s one I’d like to call the ‘ready to fight your homophobic relatives’ pose. Just kidding. (Or am I)?”

Love seeing all the love from LGBTQ+ fans today! Now here’s one I call the “ready to fight your homophobic relatives” pose. Just kidding. (Or am I?) Haha! 😘 pic.twitter.com/5voHHdZViA

This was followed by encouraging others to support LGBTQ organizations such as Trans Lifeline, the Sylvia Rivera Law Project and PFLAG, which is geared specifically toward parents and families.

You know what they say … not all heroes wear capes. But they do all fight for humanity in their own way. Carter might have retired her magical tiara, but she’s still a queen.