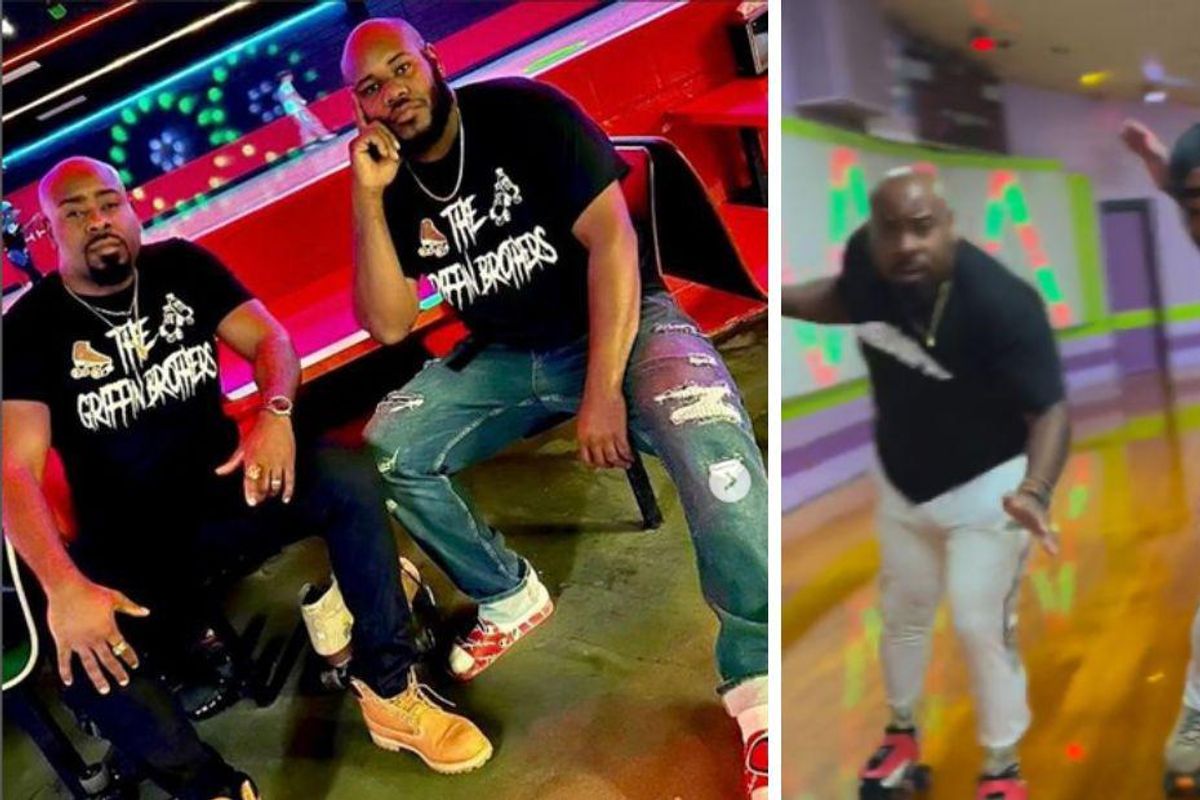 I can’t roller-skate to save my life. It looks like so much fun—I’ve never seen people not look happy while roller-skating. There’s the freedom to glide across the floor, even if it’s only temporary, and it’s such a good way to get out on the floor and move your body. What’s not to love?

Brothers Marcus and Michael Griffin, also known as The Griffin Brothers, share videos of themselves roller-skating on TikTok and Instagram. In the videos, the pair performs synchronized skating moves to a variety of old-school hits (and more current ones), mostly at their local roller rink in Delaware. It’s clear from the videos that the brothers get a great deal of joy out of roller-skating.

“As soon as you step on the floor, like, you ascend into another dimension and I think that’s where the love comes from now,” Marcus Griffin told Good Morning America in an exclusive interview.

“It’s not even about us anymore. It’s about our supporters and the comments and the messages we get from people,” continued Marcus.

Those messages are nothing but overwhelmingly positive:

“I love watching your tik toks!! And I want to learn to skate!!”

“You all make it look so easy.”

“I have never wanted to go back to skating until I watched your videos. I remember being a little girl wishing I could groove on skates like those cool adults who’s whooshed passed me with headphones and a Walkman while dancing. I am 46 years old and studying your feet to figure it all out lol… keep skating and bringing joy!!!”

Often wearing coordinating (or in some cases matching) outfits, the Griffin brothers tear up the rink with the smoothest moves. They clap, slap and perform other fun moves that keep the videos fresh and entertaining. Seriously, you can’t watch just one video—it’s like eating potato chips. The pure joy radiates through the screen.

“We’re bringing back those old feelings that people had when they used to go skating, when they didn’t have to worry about the bills, the houses, everything,” Marcus told GMA. “When they watch us, they get a certain joy in themselves, what they felt when they were younger, like when times were good, no pandemic, no mass shootings, no nothing. They don’t think about that.”

Introduced to roller-skating by their mom as children, Marcus explained that they would spend their weekend nights at the roller rink, same as their mom before them. The Griffin Brothers may not realize this, but their roller-skating videos are part of a longstanding tradition in Black culture. A 2019 documentary “United Skates” digs deeper into how roller-skating has been and continues to be a large part of Black culture.

“We were trying to show the importance of roller rinks as community spaces … that were centerpieces for early civil rights battles—one of the first sit-ins in the country was a skate-in at a roller rink,” Dyana Winkler, one of the filmmakers, told VICE in 2019.

The pandemic revived an interest in roller-skating. The Daily Beast reported that a viral skating video on TikTok by actress Ana Coto led to people becoming more interested in roller-skating. It stated that Coto cited Black roller-skaters as her inspiration as well.

It was during the pandemic that the Griffin Brothers saw interest in their skating videos grow as well. When one of their old videos started gaining rapid traction on YouTube, it inspired the brothers to head back to the rink. “I was like, Why did I stop skating? Why did I stop skating? And the love just came right back and then we finally made a video last year,” Michael Griffin told GMA.

“We just want to bring joy and happiness to everybody who lays eyes on this,” Marcus Griffin added.

And they definitely do!