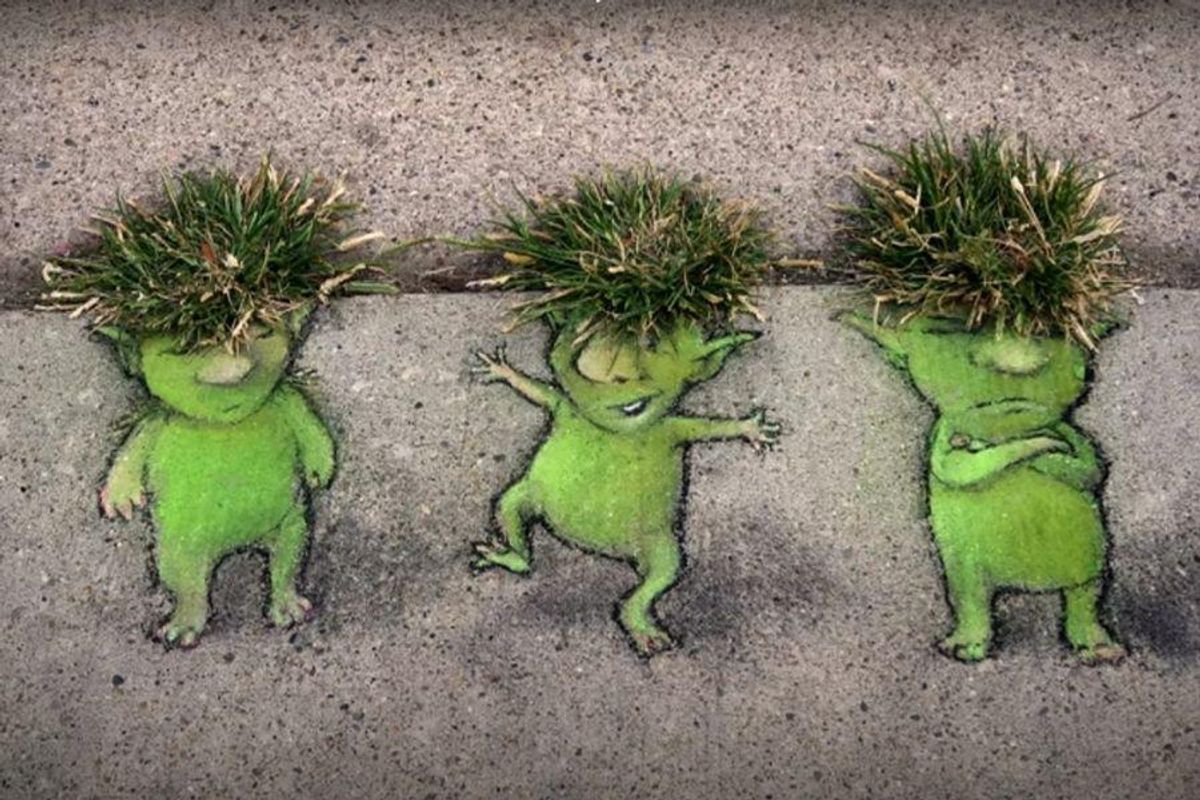 This article originally appeared on 02.12.22

Street artists are a special breed. While “the art world” can sometimes be a snooty, elite place for those with means, street art is made for everyone. Sometimes that means large public murals, but street art can be small, too. In fact, some of the best street art is so small you might miss it if you’re not paying attention. But those who are can discover some delightful surprises.

Just imagine walking down a sidewalk and seeing this little fella at your feet:

Or this young lady:

That would make your day, wouldn’t it? Or at least bring a smile to your face for a while?

Public art is an act of love to strangers, a way of connecting to people without saying a word. It says, “Hey there, fellow human. Here’s a little something to make you smile, just because.”

Zinn has created an entire world of characters who pop up in unexpected places. For instance, meet Gerald the otter, who is waiting for a blind date in this tree stump.

Zinn uses chalk and charcoal to make his cast of characters come to life in cracks and crevasses, sidewalks and tree trunks. His creations aren’t meant to last forever; in fact, as Zinn points out, the temporary nature of them adds value to them.

“Famous works of art hanging in museums get seen by thousands of people every day. But this? You could be among the dozens of people who get to see this while it exists,” he told CBS Mornings. “That’s pretty special.”

Watch how he takes something he finds in the sidewalk and transforms it into a sweet little duo.

Sometimes he uses natural things he finds as inspiration for a piece.

Other times, he uses something human-made, like this upside down terra cotta pot:

Or this manhole cover:

Sometimes the shape of a rock lends itself to a character, like Keith and his emotional support chick here:

Or the space itself serves as inspiration.

Nadine the mouse features in many of Zinn’s pieces, probably due to her small size making it easy for her to fit into small spaces.

Usually his pieces use what’s already there—like a crack in the sidewalk—to tell a story.

The 3D nature of his drawings make it feel as if his characters are truly there.

“Looks like another long day of things stubbornly refusing to be impossible,” he writes in a caption of one of his “pigasuses.”

(Speaking of having wings, Nadine found a pair for herself.)

Watch Zinn turn a simple pot into a character with personality in a matter of minutes:

His entire Instagram page, Facebook page and TikTok channel are filled with endless delight. It was nearly impossible to decide what to include in this article because I wanted to include everything.

This is all well and good, you might say to yourself, but how does Zinn make a living if he’s not selling this art?

He sells books and prints of photos of his artwork on his online store. He also gets invited to schools and events. He has created a career for himself by rejecting blank canvases, putting his imagination out on the street for everyone to see for a while, then selling versions that will actually last. Pretty brilliant, really.

Zinn gave a fascinating TEDx Talk explaining how he found his own artistic niche. You’ll never look at a parking meter or sidewalk the same way again.