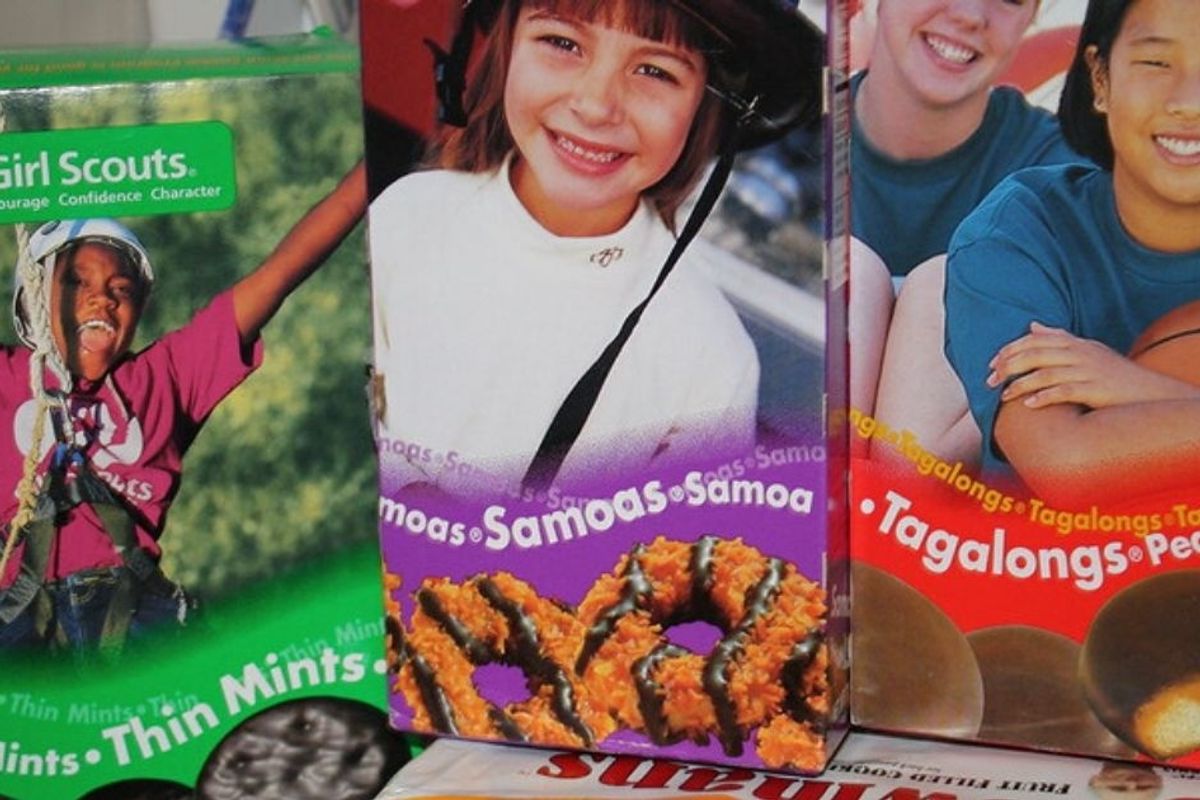 This article originally appeared on 03.09.20

Somewhere in Salt Lake City, a Girl Scout is getting allll the good mojo from The People of the Internet.

Over the weekend, Eli McCann shared a story of an encounter at a Girl Scout cookie stand that has people throwing their fists in the air and shouting, YES! THAT’S HOW IT’S DONE. (Or maybe that’s just me. But I’m guessing most of the 430,000 people who liked his story had a similar reaction.)

“I just saw the most wild thing!” McCann wrote on Twitter. “A man started walking toward the Girl Scouts cookie stand in front of the grocery store and he yelled ‘My bitches are BACK’ and this Girl Scout just yelled ‘No. Walk away.’ AND HE DID.”

So simple. So straightforward. But it gets even better.

McCann wrote out the full story on his blog, It Just Gets Stranger, offering some extra details to his tweets.

“It was truly jarring,” he wrote of the man’s exclamation. “Like, it was sort of the last thing I expected anyone to say. My mind suddenly rebooted. The six or so other people who were all standing around in front of the grocery store froze and looked at him. I opened my mouth to say something, but then really didn’t know what to say.”

“It was unclear who he was calling ‘bitches,'” he continued. “If it was the Girl Scouts, well obviously that was terrible. If it was the cookies, I mean that’s kind of funny (don’t @ me), but totally inappropriate to say to a bunch of 12 year olds (is that how old Girl Scouts are?). Either way, he shouldn’t have said it and I don’t know what could have possibly made him think this was a fine way to approach a group of Girl Scouts.”

McCann said the girl’s response was immediate, and it floored everyone. “Her tone was so full of confidence and sass,” he wrote. “It was the most perfectly delivered line I have ever heard.”

“This dude completely froze. He just stopped walking. His face went bright red. His mouth was sort of gaping open. He did this very awkward and stilted nod, almost apologetic, abruptly turned around, and shuffled back to his car at like 6-minute-mile pace. The girl just death stared him all the way through his walk of shame.”

I still can’t process what I just saw. I don’t understand it at all. It was like witnessing the worst miscalculation he was bright red and just went back to his car. Everyone just stood in silence. This girl death stared him all the way through his walk of shame.

McCann says it took him a bit to digest what he’d just seen.

“I ended up walking into the store and the entire time I was shopping I was just trying to process what had happened. I kept replaying it over and over and wondering if I had misheard or misunderstood something,” he wrote.

“Who was this guy? Did he just make the biggest miscalculation of his life? Is he going to move away and start a new life now? Is that girl going to be president one day? Can I adopt her? Can she adopt me? Can I start a cult to follow her?”

As he was leaving the store, he went up to the girl to compliment her—then got another perfectly delivered line from the intrepid Girl Scout.

“Two adult women were standing behind the girl (the troop leaders, I assume),” he wrote. “I said to the girl, ‘I saw how you handled that man earlier. That was really really impressive. Your troop is pretty lucky to have you.'”

“And this girl. This Goddess of a human. The one I’m for sure going to worship if ever she starts a religion. Without stuttering. With perfect comedic timing. She responded:

‘You gotta be pretty tough if you’re gonna go out in THIS outfit.‘”

I just went and talked to her (tried to buy cookies but couldn’t because cash only). I told her I was impressed with how she handled that dude and she just said with perfect comedic timing “you got learn to be pretty tough if you’re gonna go out in THIS outfit!”

Let’s all give this girl a virtual high five for her gumption and wit. It takes a lot of courage to say something to an adult when you’re a kid, especially a man who is doing something inappropriate. The fact that she seemed to have been perfectly prepared for that moment, shutting him down so immediately and decisively that everyone in the vicinity stopped to take note, is so dang impressive.

This is what happens when you teach girls their true worth and encourage them not to accept anything less than respect and dignity. Gotta love it.