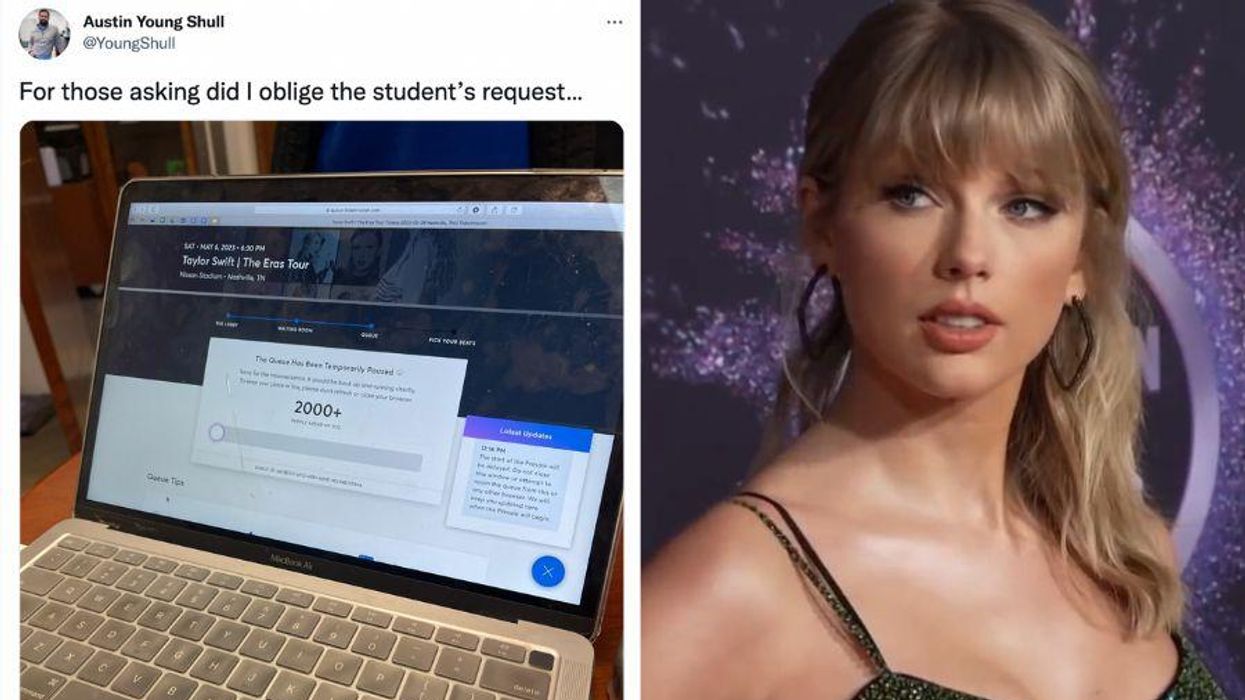 When biology professor Dr. Austin Shull received an important email from one of his students, he likely expected it to be about a homework assignment. Instead, the assignment was for him. If he was up to the task, that is.

With her subject line reading “REALLY IMPORTANT,” the student explained how she was currently in the online queue to purchase highly coveted Taylor Swift tickets, but her anatomy practicum class was fast approaching. You can see the conundrum.

The proposal was simple—if Dr. Shull agreed to watch her spot in line on her laptop while she took the class, it would make her “entire year.” Keeping in theme, her email concluded, “please please please don’t be the anti-hero.” For those that live under a rock, “Anti-Hero” is one of Swift’s latest singles. Where have you been?

Anyway, Shull agreed. And not only did he make his student’s entire year, he melted hearts from sharing his story.

Shull posted the email to his Twitter, along with the quip, “You have to serve many roles when you’re a professor and advisor…” and it wasn’t long before the tweet went viral.

The professor then clarified with another tweet saying “for those asking did I oblige the student’s request…” along with a picture of the student’s laptop showing the Ticketmaster screen. More than 2,000 were ahead in line. Such is the power of T Swift, people.

After that, Dr. Shull was being hailed as “professor of the century” for his act of kindness.

One person noted, “Seriously, Professors like you are who we remember. Who make a difference! You understand that things, life, outside of school does exist. And life experiences can mean so much!! It’s a small thing but probably meant so much to her.”

For those asking did I oblige the student’s request… https://t.co/OuVzpEySDs pic.twitter.com/tZX62FFJfz

Other professors apparently found themselves in similar situations. One shared that they allowed their students to “set up the laptops on a spare table and watched them through 3 hours of dissection. I was just jealous cause I didn’t get into the pre-sale!”

Just check out this outpouring of love below.

My mental health really needed this today. Thanks for not being the antihero lol 😂

An icon for us all

This is fantastic. Bravo 👏

In the end, Dr. Shull’s generosity paid off, because the student succeeded in not only nabbing concert tickets, but she “did well on her practicum too,” according to his subsequent post.

This feat is all the more remarkable considering that scoring tickets to the latest Taylor Swift concert has been the source of stress and drama for many a Swiftie. So high was the demand for entry into the beloved pop singer’s Eras Tour that Ticketmaster announced that it would cancel general public ticket sales, a decision that caused dismay not only among fans, but Swift herself, who sent an Instagram story sharing that the experience has been “excruciating.”

@graceh00ver got her tickets everyone!!! (Oh and i think she did well on her lab practicum too 😉) https://t.co/DhCd22UyN3 pic.twitter.com/OOFmeNrh9w

You don’t have to be a Taylor Swift fan to know how life changing it can be when someone is supportive of your passions. Great teachers do this in so many ways, and Dr. Shull’s story is just another sweet example. Kudos to him for leaning into his compassion and understanding that joy is just as important as classwork, and for clearly making his students feel safe enough to be themselves around him. This professor played his role of “hero” perfectly.