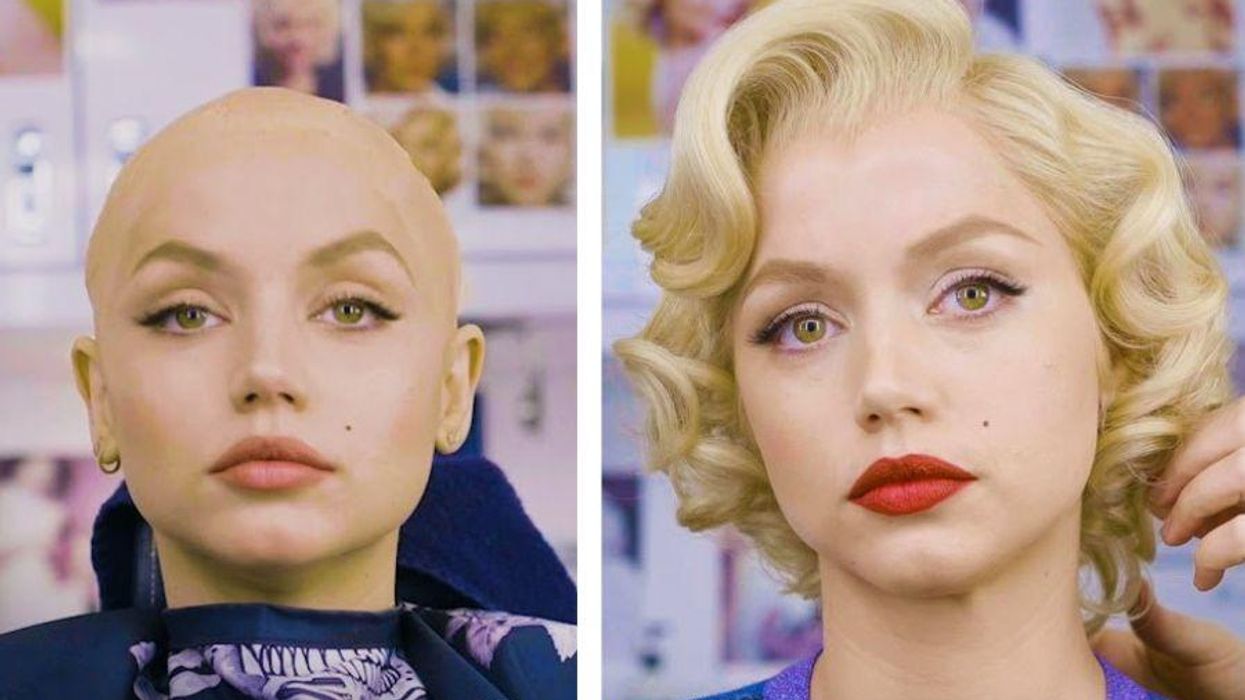 We know that there’s a painstaking amount of detail that goes into bringing characters to life on the big and small screen. But ever so often, a fascinating look behind the scenes will come along that’s so mind-blowing, one can’t help but feel a fresh level of gratitude (and awe) for the effort that goes into modern-day storytelling.

Take, for instance, the hyperrealistic wigs we see in so many films and television shows. Odds are, one of your favorite characters wears one—even when you would bet your life savings that the hairs you see are sprouting from their own head. This illusion is the result of dedicated hours upon hours from artists that are so much at the top of their game, we might as well just call them hair sorcerers.

In a video posted to YouTube by Insider, Rob Pickens, founder of Wigmaker Associates, takes viewers on a tour of the wigmaking process for some of today’s most iconic shows, from start to finish. As Pickens explains, since cameras have become more equipped to pick up every detail, wigs must become more detailed and precise to not only mimic real hair texture, but perfectly fit an actor’s head shape to look as natural as possible.

To do this, hair teams don’t just measure an actor’s head. They create a mold that completely replicates their skull shape using a headwrap made with cellophane and tape—lots of it—after which they trace over the hairline with a sharpie. 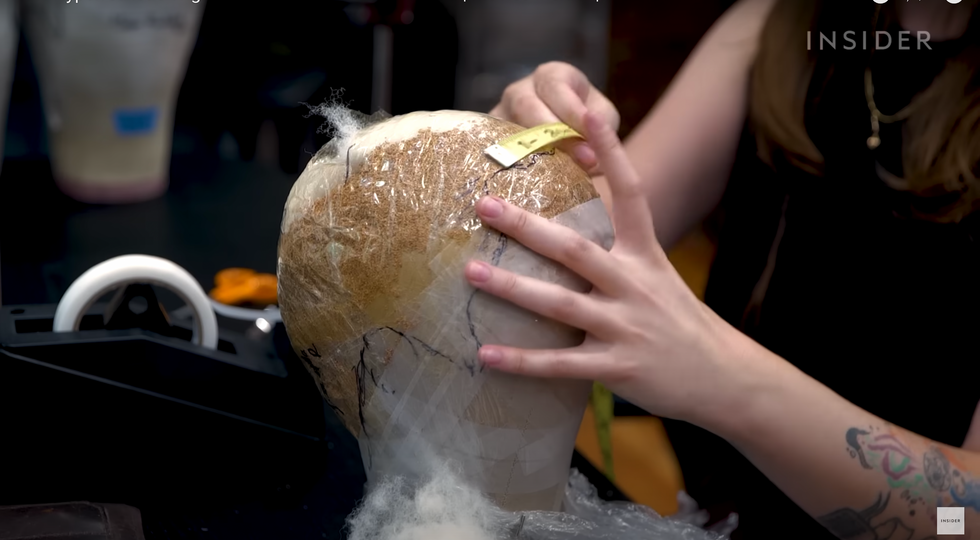 That headwrap then goes onto a canvas block (which more or less looks like a mannequin head), and that canvas block is filled with stuffing to match the actor’s exact head shape in a process that Pickens calls “padding the block.”

It might be a laborious endeavor, but once it’s done, that mold can be used for any production in the world. Cranium cloning, if you will.

Next, wigmakers must create a layer of superfine lace that will serve as the piece’s foundation. For very short hair styles, a silk base is used to create the look of skin that might be visible under the hair’s surface. This technique was used for later seasons of Netflix’s “Stranger Things” to create Eleven’s signature buzz cut, when actress Millie Bobby Brown couldn’t shave her head. 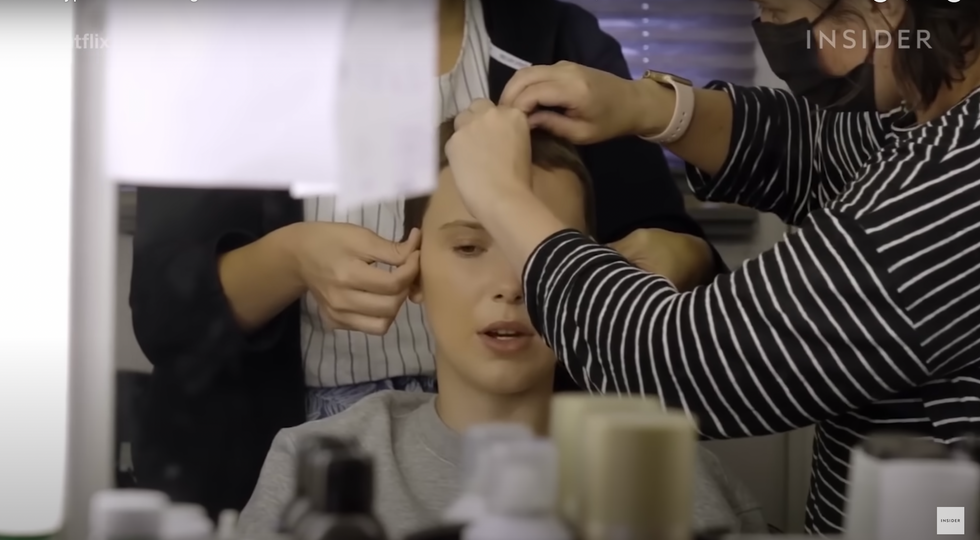 When actors are portraying real people with different skull shapes and hair lines, the hair team must add an extra step of creating prosthetic pieces to go under the wig’s foundation. In Hulu’s “Pam & Tommy,” for example, a prosthetic forehead was given to actress Lily James to replicate Pamela Anderson’s characteristic high forehead.

The next step is the ventilating process, where each hair is stitched into the lace one by one using a variety of knotting techniques. The key here is to match an actor’s natural hair patterns, like which direction the hair at their temples prefers to go, while keeping it malleable enough to part anywhere, just like you can with real hair.

As for the hair itself, the choices come down to either real human hair or synthetic. Synthetic hair, which is more durable but has more of a light-reflecting sheen, is usually used for background actors. But for “hero wigs” that must pass the close-up test, real human hair is required.

Pickens might even add mohair (a durable, resistant hair fiber made from angora goats) to hairlines to mimic baby hairs, which he did for Ana De Armas for her portrayal of Marilyn Monroe in Andrew Dominik’s “Blonde.”

Wigs might evoke a sense of glamor, but in the world of realistic storytelling, accuracy takes precedence. When tasked with creating an aging and syphilis-ridden Al Capone (played by Tom Hardy), Pickens helped convey the story with hair that was “actually a bit sickly before we texturized it.” 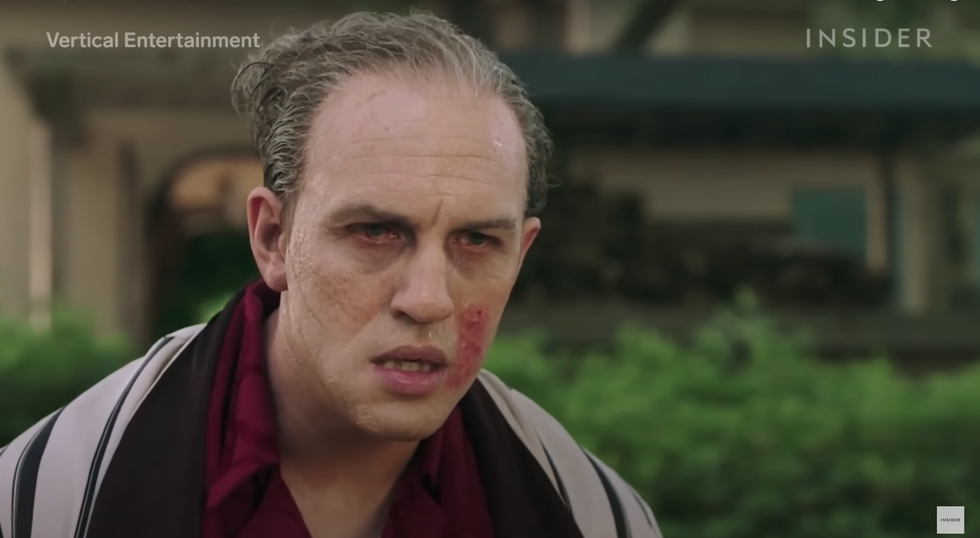 But wait, there’s more. We are now to the coloring process, which, as Pickens puts it, is a blend of “alchemy and color theory and figuring out how that’s going to play on the final product.” Colorists have to understand how a scene might be lit and edited, so that they can make an educated guess as to how to color the hair so it has the desired shade in the final cut, rather than in real life.

“Reds can be quite the nightmare sometimes,” Pickens shared. “If we create a red wig and they put a blue filter over the entire thing, it could look brown.”

And just to make matters more complicated, the looks don’t just get created for the main actors. Anyone performing as a photo double or stunt performer also needs a matching (usually synthetic) wig. Stunt double wigs in particular are tricky, as they need to be durable enough to endure take after take of literally rolling with the punches, yet still be easily removed for when a stunt might go wrong. But also they must look exactly like the hero wig. No big deal, right? “I love learning stuff like this. I never would have thought about how much went into wigs. Unsung masterpieces are everywhere.”

“This is so cool. I honestly had no idea so much detail went into this. I’m impressed.”

More content is being put out now than ever before, causing many shows to have to create costumes and wigs on a mass level (read: faster and cheaper). This undoubtedly leads to a drop in quality that can sometimes take us out of a story—something we covered in a previous article. However, when artists are given the opportunity and resources to really work to their highest potential, magic happens. Kudos to the pros who completely immerse us into a story, strand by strand. Your labor of love is appreciated.

You can watch the full video below, which has even more fascinating info: