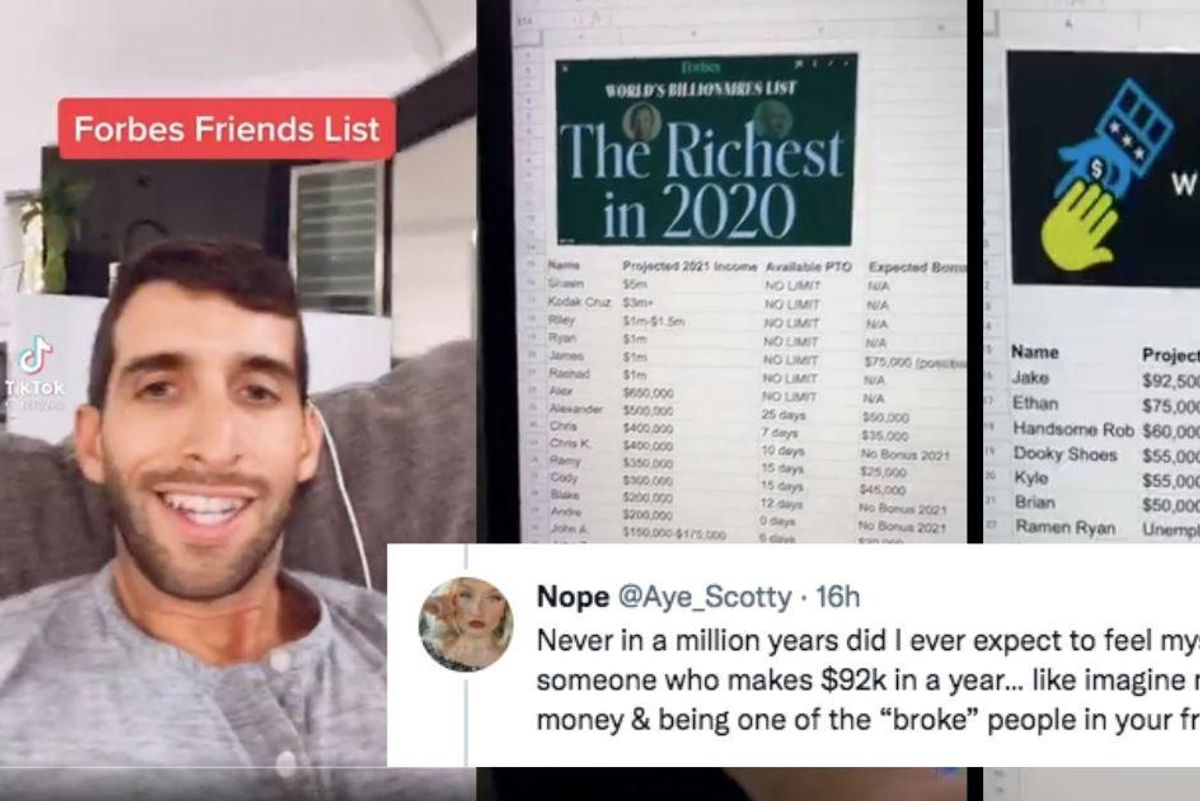 This article originally appeared on 08.20.21

Sometimes you see something so mind-boggling you have to take a minute to digest what just happened in your brain. Be prepared to take that moment while watching these videos.

Real estate investor and TikTok user Tom Cruz shared two videos explaining the spreadsheets he and his friends use to plan vacations and it’s…well…something. Watch the first one:

What in the wealth is thispic.twitter.com/NTPTKT5CZG

How about the fact that his guy has more than zero friends who budget $80,000 for a 3-day getaway? Y’all. I wouldn’t know how to spend $80,000 in three days if you paid me to. Especially if we’re talking about a trip with friends where we’re all splitting the cost. Like what does this even look like? Are they flying in private jets that burn dollar bills as fuel? Are they bathing in hot tubs full of cocaine? I genuinely don’t get it.

To be crystal clear here, the top 5 friends on the Forbes list are willing to spend more than double what the guy at the bottom of the Welfare 10 list makes per year on a 3-day guy’s trip. I don’t know what to do with this information.

But that’s not even the full spreadsheet. It might make sense if this guy was just rich, had always been rich, only knew rich people, and therefore having multiple millionnaire friends was his normal. Surely that’s some people’s reality who were born into the 1%.

That’s not the case here, though, because Cruz also has a Welfare 10 list. He says this group of friends who make less than $100K a year call themselves that, and perhaps that’s true. (If I were a part of this group, I might call myself a welfare case too because everything’s relative and some of these dudes spend more in an hour of vacation than I spend on my mortgage each month.)

It’s like we can see our society’s wealth gap all laid out nice and neatly in a spreadsheet, only these people aren’t even the uber-wealthy and uber-poor. This is just the range of this one guy’s friends.

I have nothing against people who build success and wealth for themselves, and even $5 million per year is hardly obscenely wealthy by billionaire standards. But Cruz says he’s known most of his “welfare” friends since college, which presumably means most of those guys have college degrees and are making pittance in comparison with the Forbes list. One could claim the guy making $5 million a year just works harder, but does he really work 100 times harder than the guy making $50,000? Doubt it.

Money makes money, and after a certain threshold of wealth or income, it’s actually quite easy to get and stay rich without actually “earning” more money, assuming you’re reasonably wise and responsible. So maybe the guys who are willing to shell out $125,000 for a week-long trip should offer to pay the travel expenses of the friends they “hang out with regardless of income” who don’t even make that in a year, since that’s probably just the interest they’re making on their wealth anyway.

But what do I know? This is like an entirely different world to me and probably 99+% of Americans, as evidenced by some of the responses.

u201c@_jasminwats @Radio_Reem I noticed everyone with PTO has less than is legally required in the U.K., crazy!!u201d

Naturally, there will be a range of incomes in any group of people, but 1) most of us don’t actually know how much our friends make, and 2) even fewer of us make spreadsheets with that information in order to rank our friends and figure out who can go on which vacations.

People are just endlessly fascinating. That’s all I’ve got.