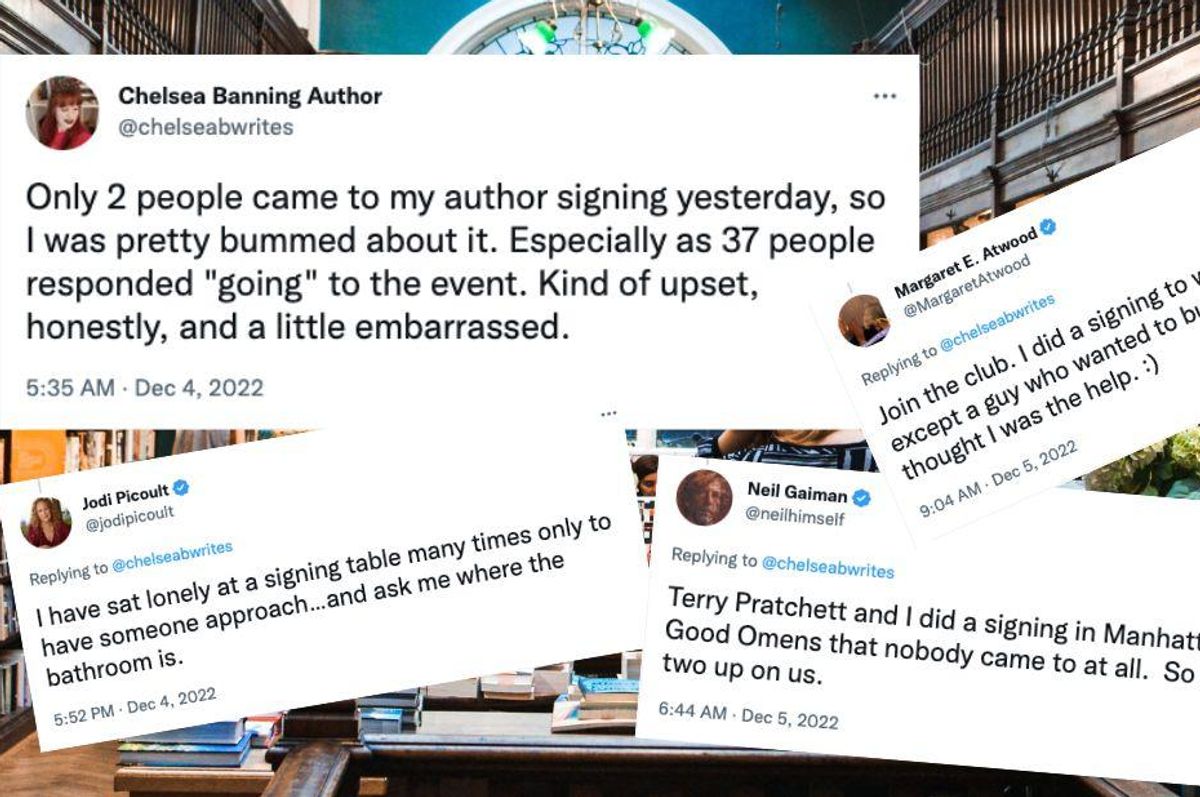 Putting creative work out into the world to be evaluated and judged is nerve-wracking enough as it is. Having to market your work, especially if you’re not particularly extroverted or sales-minded, is even worse.

So when you’re a newly published author holding a book signing and only two of the dozens of people who RSVP’d show up, it’s disheartening if not devastating. No matter how much you tell yourself “people are just busy,” it feels like a rejection of you and your work.

Debut novelist Chelsea Banning recently experienced this scenario firsthand, and her sharing it led to an amazing deluge of support and solidarity—not only from other aspiring authors, but from some of the top names in the writing business.

Banning shared on Twitter that 37 people had responded as “going” to her book signing at Pretty Good Books in Ashtabula, Ohio, on December 3, but only two showed up.

“Kind of upset, honestly, and a little embarrassed,” she wrote.

u201cOnly 2 people came to my author signing yesterday, so I was pretty bummed about it. Especially as 37 people responded “going” to the event. Kind of upset, honestly, and a little embarrassed.u201d

A librarian by trade, Banning spent 15 years crafting the story for her fantasy trilogy about King Arthur’s children. The first book in the series, “Of Crowns and Legends,” was published in August and Banning has been trying to market it ever since.

“For a while I felt like I was throwing my book into the void and getting nothing,” she told NPR. “This felt like last straw.”

Then something amazing happened.

That tweet—which Banning had considered deleting shortly after she posted—started making the rounds. And much to her surprise and delight, Banning got responses from the likes of Margaret Atwood, Jodi Picoult, Neil Gaiman, Stephen King and other famous authors, who shared their own unattended book signing woes.

u201c@chelseabwrites Join the club. I did a signing to which Nobody came, except a guy who wanted to buy some Scotch tape and thought I was the help. :)u201d

u201c@chelseabwrites Terry Pratchett and I did a signing in Manhattan for Good Omens that nobody came to at all. So you are two up on us.u201d

u201c@chelseabwrites I have sat lonely at a signing table many times only to have someone approachu2026and ask me where the bathroom is.u201d

u201c@linwood_barclay @chelseabwrites At my first SALEM’S LOT signing, I had one customer. A fat kid who said, “Hey bud, do you know where there’s some Nazi books?”u201d

Even some famous nonauthors unexpectedly swooped in to lift Banning up.

Story after story poured in from dozens upon dozens of household writing names who had experienced two or one or zero people showing up to a book signing event. Anyone who has ever felt like they had failed due to a lack of interest or audience would find the thread inspiring, or at the very least, comforting.

But what was just as heartwarming as the successful writers commiserating with Banning was the fact that she shared her story in the first place. It’s not easy to be vulnerable like that—most of us want to share our wins, not our perceived losses, with the world. But Banning demonstrated how opening up invites others to do the same, which lets everyone know they are not alone in their struggles.

What a beautiful thing all around. And to make it even better, Banning sold out of her signed copies that very same day. Here’s to the power of sharing and caring!