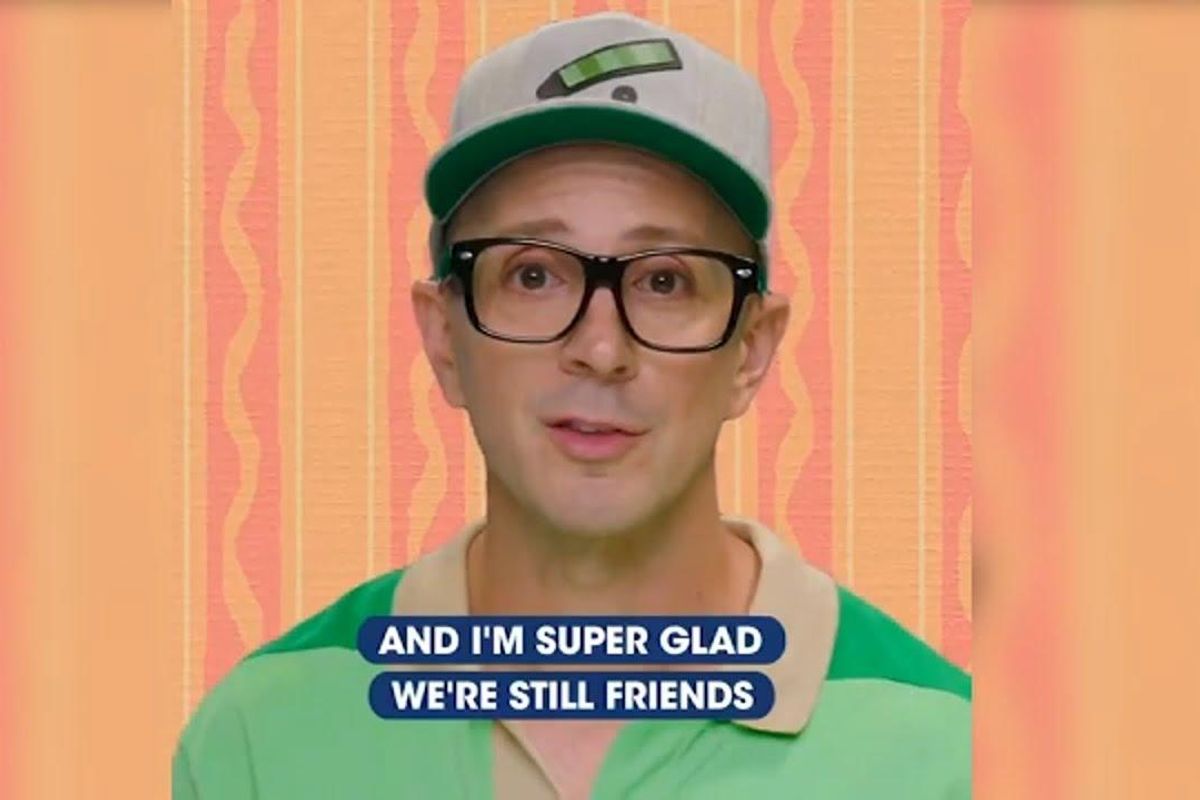 Former “Blue’s Clues” host and Millennial icon, Steve Burns, 49, made an appearance at Steel City Con in Monroeville, Pennsylvania earlier this month and he had no idea the surprise he was going to get. According to TMZ, Brandon Ragland, 25, stopped by his booth and showed him a photo that brought both men to tears.

It was a shot of Ragland taken in 2000 when he was just 4 years old, hanging out with Burns, who was his favorite TV personality. At the time, Ragland had stage 4 cancer in his kidneys and lungs so he was able to meet Burns through the Make-a-Wish program. The Make-a-Wish experience also included a shopping spree at Toys “R” Us and tickets to see “Blue’s Clues Live.”

After seeing the photo, Burns’ eyes lit up and he said, “I remember this and you!” Burns then told Ragland he remembers he was a bit of a wild child that ran all around the New York City restaurant where they met.

The two then took a reunion photo and both burst into tears. “This made my entire year and I’m so glad you’re here,” Burns told Ragland.

“I could hear his voice crack and get choked up, so I instantly just started to do the same,” Ragland wrote on Facebook. “I thanked him for not only being there today, but meeting me all those years ago.”

“One of the nicest and most genuine people I’ve had the pleasure to meet,” Ragland continued. “I think he might have been more moved than I was over the whole ordeal.”

The great news is that Ragland has been cancer-free and in remission for 23 years.

Burns left “Blue’s Clues” in 2002 for a career in music and voiceover acting. As a musician he’s worked with Steven Drozd from The Flaming Lips and composed the theme song to “Young Sheldon.” He also remained part of the “Blue’s Clues” family, working as a mentor to the show’s current host, Joshua Dela Cruz. He even appears on the show from time to time.

Most of Burns’ post “Blue’s Clues” work has been behind the camera, leaving many who loved him as a child to wonder what happened to him. He addressed his sudden departure from the show in September 2021 by appearing in his “Blue’s Clues” outfit on Nick Jr.’s Twitter account.

“You remember how when we were younger, we used to run around and hang out with Blue and find clues and talk to Mr. Salt and freak out about the mail and do all the fun stuff?” he asked on the video. “And then one day, I was like, ‘Oh hey, guess what? Big news, I’m leaving. Here’s my brother Joe, he’s your new best friend,’ and then I got on a bus and I left and we didn’t see each other for like a really long time?”

Burns then gave a heartfelt “thank you” that brought countless Millenials to tears.

“I guess I just wanted to say that after all these years, I never forgot you. Ever. And I’m super glad we’re still friends,” he said.