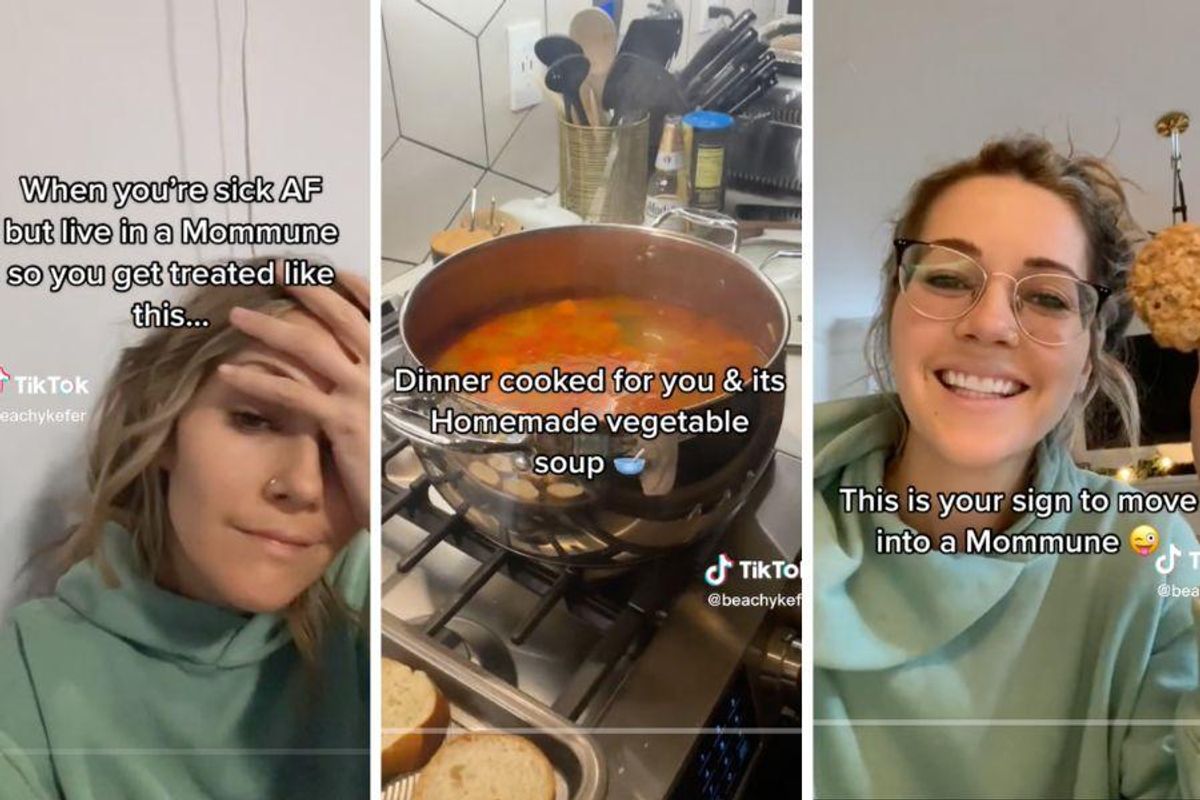 The proverb “it takes a village” still holds true, despite communities dwindling in our modern world. Humans in general are hard-wired for collaboration, and when it comes to parenthood—an inherently difficult task—having the help of others can make a world of difference.

That’s why single mom Kristin, who goes by the handle @beachykefer, is sharing the gospel on how her fellow single moms support each other through challenging times, in what she lovingly calls a “mommune.”

In a now viral TikTok, Kristin shared how when she was under the weather (or “sick AF,” as she put it) her mommune not only made her homemade soup and cookies, they took her kids out to the park so she could rest and recover.

“This is your sign to move into a Mommune,” she captioned, while taking a well-deserved cookie bite.

Needless to say, other single moms were instantly intrigued by the idea and wondering where to sign up.

“Where do I get into a Mommune. Sounds like the perfect plan,” wrote one person.

Another wrote, in all caps,“THERE’S A NAME FOR THE DREAM???”

It appealed to more than just moms, too.

“I am child free but would join in a heartbeat. A bunch of women all helping and supporting each others sounds perfect,” commented one person.

“Quick, someone knock me up so I can live on a mommune,” joked another.

Kristin had so many women asking her how she formed a mommune that she created a follow-up video to explain:

Before living in her mommune, she and her then-husband lived in a bus enjoying a nomadic lifestyle. However, that feeling soured when Kristin discovered her husband was having an affair.

She packed up her daughter and her dog and moved in with her friends—a married couple who welcomed them into their home and treated them so well that she called them her “angels.”

Only a couple of months of living there had passed when Kristin found out that another close friend was in a similar situation. Wanting her friend to have the same support during a challenging time, she invited her to move in, so that they could heal and raise their children together.

So now, Kristin’s “chosen family” consists of three women and one man, who they nickname a “unicorn.” And it’s been “the most amazing thing ever.”

“I 100% recommend starting your own mommune,” she said, adding the caveat that “it really does have to be [with] people who align with you, your values, your beliefs, and how you want to raise your children, and you trust them. I think that’s the most important thing to me.”

Be it blood relatives or platonic life partners, having a supportive, communicative family is so important. It’s great that there are opportunities out there to carve out a tribe for yourself, in whatever shape works best for you.

Wanting to find your own mommune? Kristin noted that other single moms have begun creating their own Facebook pages for their local areas. Alternatively, start small by finding one other single mom whose values you align with.