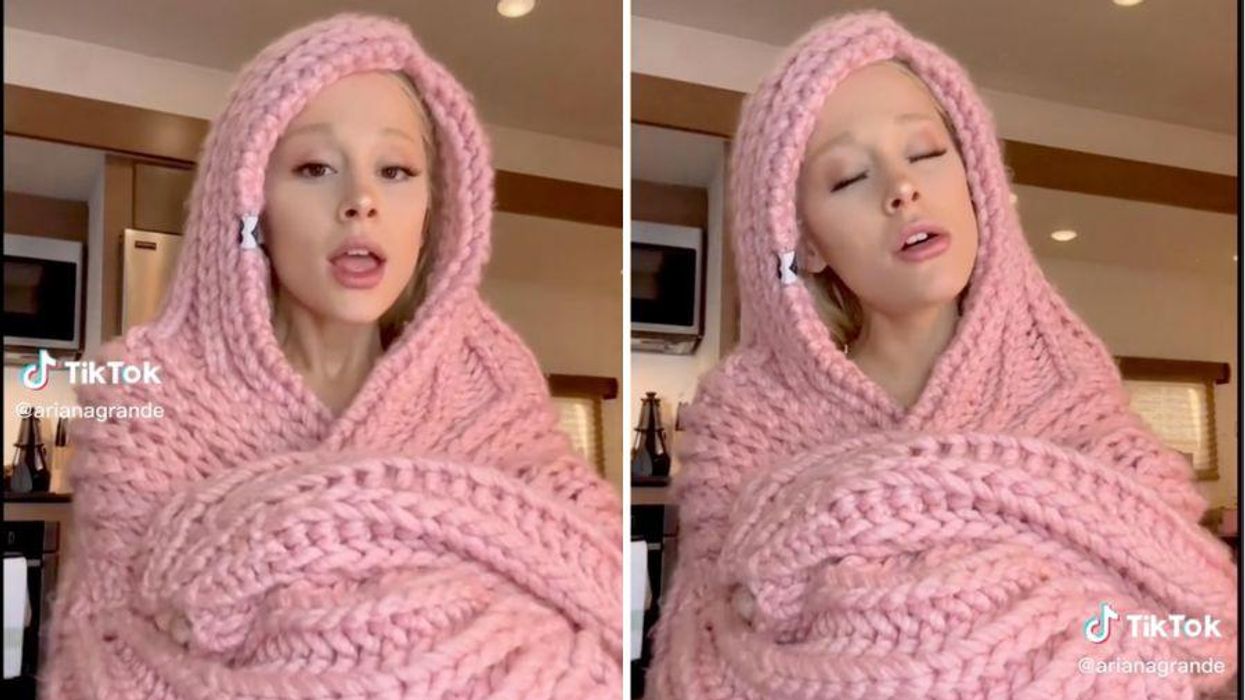 Ariana Grande might be best known as a pop queen, but her musical theatre talents run deep. She was a performer on Broadway at the age of nine, long before she began racking up Grammys. And even throughout her adult career, she’ll wave that theatre kid flag once in a while, as she did for NBC’s “Hairspray Live!”

Grande is even currently filming a live adaptation of the musical “Wicked,” playing the role of Galinda, aka Glinda the Good Witch. While the movie might not release until Christmas of 2024, the singer treated fans to an early taste of Oz with a gorgeous rendition of “Somewhere Over The Rainbow,” originally sung by Judy Garland in the 1939 film “The Wizard of Oz.”

The video shows Grande chilling in a kitchen, completely covered up in a giant pink yarn sweater—equal parts for comfort and hiding her golden Glinda locks, to be sure—as she effortlessly captures that same kind of dreamy lilt that Garland once did for the tune. Perhaps this shouldn’t come as a surprise, since Grande is a whiz at musical impressions.

wanted to sing you a little something but don’t want to sing anything that is not “Ozian” at the moment 🙂 keeping to my little bubble for now … done with lots of love.

“Wanted to sing you a little something but don’t want to sing anything that is not ‘Ozian’ at the moment 🙂 keeping to my little bubble for now,” Grande wrote in the video’s caption. “Done with lots of love.” The cover comes as a polite response to a fan who asked, “Why aren’t you a singer anymore?” since Grande hasn’t put out a new album since 2020.

Understandably, filming two huge movies at the same time (“Wicked” director Jon Chu previously announced that the movie would be split into two parts) leaves little time to produce new music. But rest assured, Grande is, and probably always will be, a SINGER. (All-caps necessary to encapsulate all that talent.)

Grande’s clip quickly went viral, reaching yet another famous Glinda—Kristin Chenoweth. Chenoweth, who originated the “Wicked” role on Broadway, threw on a hot pink feathered sweater and performed a TikTok duet of the song, along with the caption, “Just two Ozians.”

Is there any better seal of approval than a duet with the OG Galinda herself? I don’t think so.

“Wicked” boasts an impressive cast of not only Grande, but Cynthia Erivo as Elphaba, Michelle Yeoh as Madame Morrible and Jeff Goldblum as The Wizard of Oz. And if this cover is any indicator, it seems like it’s going to be a lovely retelling of the story…with one amazing soundtrack.