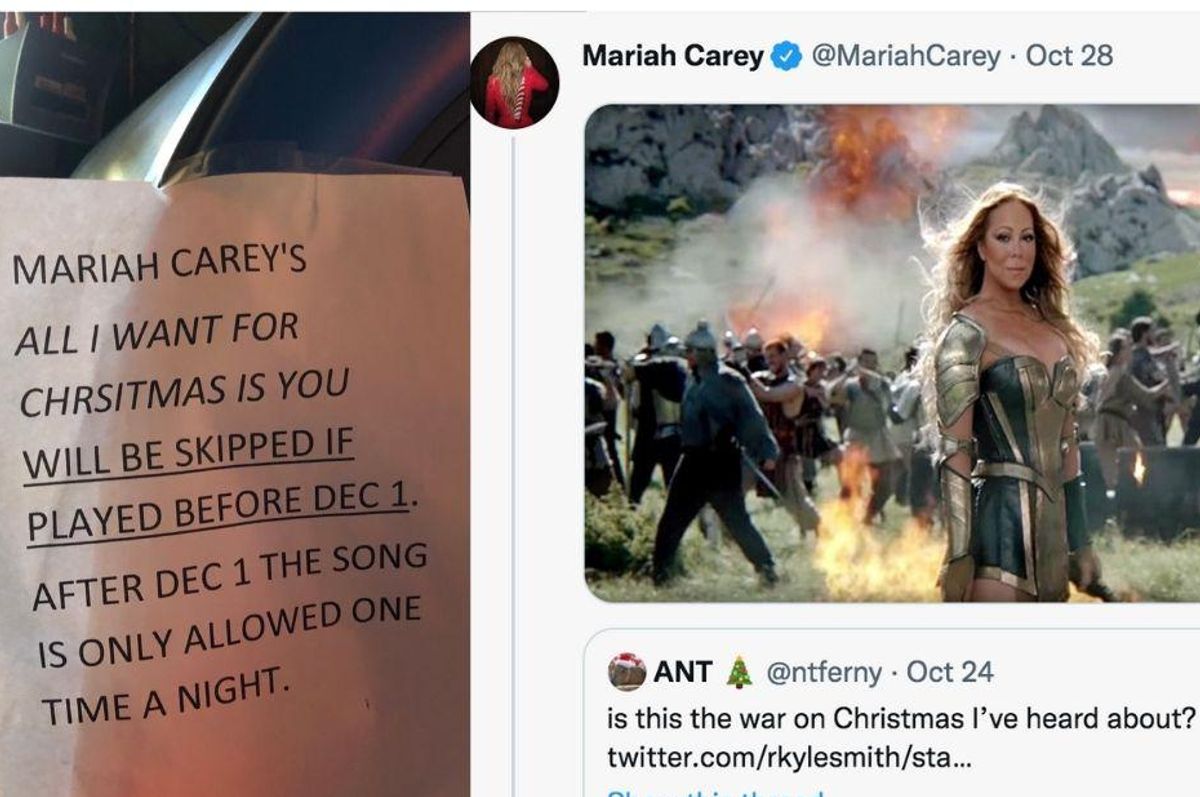 Mariah Carey’s uber famous “All I Want For Christmas Is You” has been a staple of the holiday since the late ’90s. Who can remember the last time they entered a department store without trying–and failing– to match that impossible whistle tone during the final chorus? It’s about as synonymous with Yuletide cheer as Rudolph, only sassier.

Well, apparently a (still unidentified) bar in Texas has had quite enough of the holiday pop hit. Someone there taped an unceremonious piece of white paper next to the jukebox that stated plainly “Mariah Carey’s All I Want for Christmas Is You will be skipped if played before Dec. 1. After Dec 1 the song is only allowed one time a night.”

I mean, the whole “when to start playing Christmas music” debate has been a source of contention for years. I personally cringe when November 1 rolls around and carols permeate the radio stations, but clearly this bar had an even stronger stance. The paper was tweeted by a critic for National Review. From there, the tweet went viral.

Those familiar to retail had a shared trauma response. “If you haven’t worked retail then let me explain.The song plays 50 times a day on the store radio from November 1 (maybe earlier) to December 25. It’s hell,” wrote one “victim.”

If you haven’t worked retail then let me explain.

The song plays 50 times a day on the store radio from November 1 (maybe earlier) to December 25.

Another (soon to be divorced) man wrote: “I need to print this out for my wife,” which received the prompt response of “How about you let your wife enjoy things she likes before she decides you aren’t one of those things?” Yup, holiday drama is already coming in hot.

One Twitter user responded with “Is this the war on Christmas I’ve heard about?” which caught the attention of Carey herself.

Carey’s response? In a word, iconic. The pop singer posted a photo of herself from a 2015 ad for the mobile video game “Game of War,” completely decked out in battle armor and holding a sword. Move over Xena, there’s a new warrior princess in town. And she’s ready to defend her Christmas kingdom.

Carey was quick to garner support from her fans. Like this person, asking where to join her army.

Where can I join your army? pic.twitter.com/fBcV5cwiXM

Another wrote “me on my way to fight for the queen” accompanied by a video of Carey on a jet plane and singing yet another holiday song. That’s some kind of allegiance, if you ask me.

Carey posted another video on Instagram, showing three jack-o-lanterns sitting in a row with the words “it’s not time.” Scary, sinister music plays and a bell tolls. Carey, wearing a sparkly red gown and sky high heels sneaks in through a door holding a giant candy cane the size of a baseball bat (you might see where this is going). With a swing of her candy cane, Mariah destroys one of the pumpkins, changing the message to “it’s time” while her famous-slash-infamous song plays. If a war on Christmas is what they want, a war on Christmas is what they’ll get.

This got even more fan responses, including the person who wrote, in all caps, “MARIAH INVENTED CHRISTMAS.” Not historically accurate, but the sentiment is palpable.

If you think that’s something, check out the other Twitter user who wrote “SHE IS CHRISTMAS SHE IS SANTA SHE IS THE GODDAMN TREE.” Seriously, don’t mess with Mariah fans.

Though that one bar in Texas might have won the battle, the victor in this War for Christmas is still Queen Mariah, most definitely. She’s already promoting her new Apple TV special “Mariah’s Christmas: The Magic Continues,” following up last year’s “Mariah Carey’s Magical Christmas Special.” Which might be maddening to some, but to many, it embodies a fun, cheeky, more modern way to invite the holiday spirit. And hey, at least you know TV specials don’t play on repeat while you do your Christmas shopping…