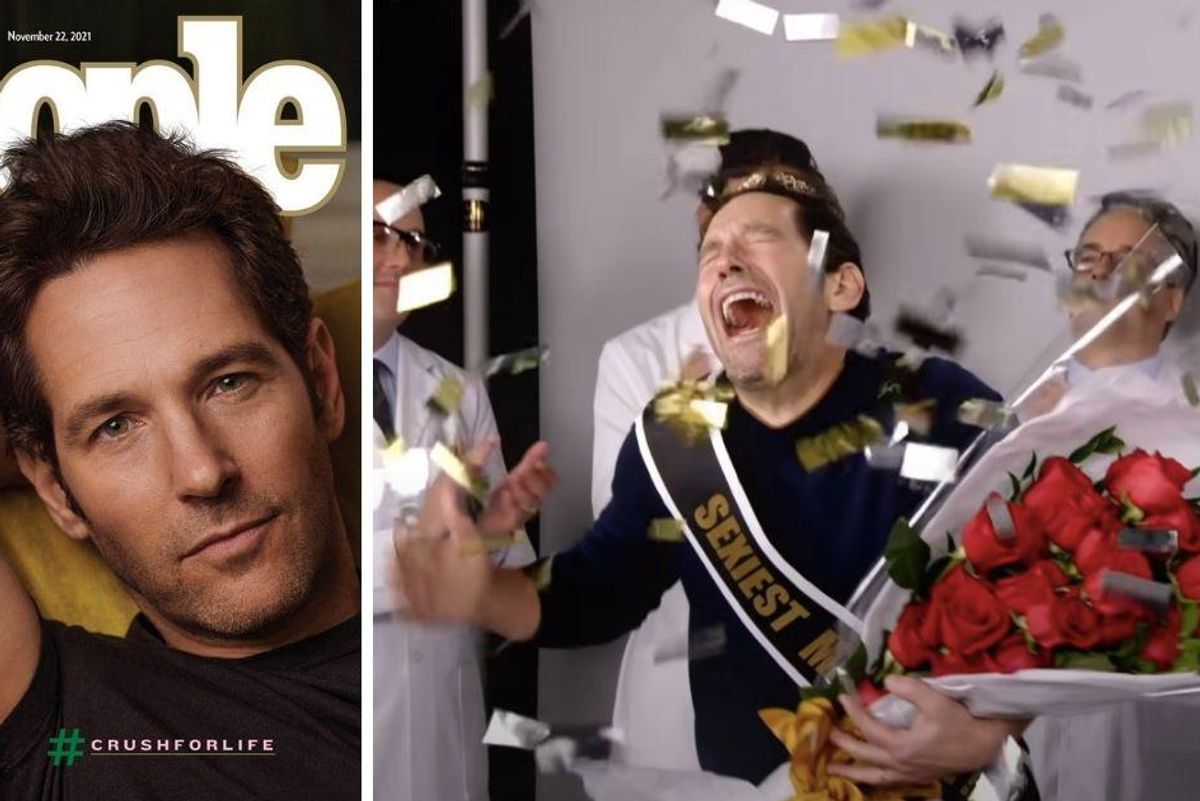 In perhaps the most universally agreed-upon choice it’s ever made, People magazine has named Paul Rudd as 2021’s Sexiest Man Alive.

Rudd, with his boyish grin and flawless skin, is certainly cute. But when you add in his well-established talent and extreme likability, the miraculously immortal 52-year-old becomes beloved. He’s got it all—the eyes, the hair, the teeth, the bod, as well as the acting chops, the humor, the humility and the genuine nice-guy-ness that makes a man sexy in the eyes of most, if not all, of us.

Nothing exemplifies why Rudd was named Sexiest Man Alive more than his reaction to it.

Check out what he told People:

“I do have an awareness, enough to know that when people hear that I’d be picked for this, they would say, ‘What?’ This is not false humility. There are so many people that should get this before me.”

“When I think about myself, I think of myself as a husband and a father,” he said. “Like I’m that. I just hang out with my family when I’m not working. That’s what I kind of like the most.” (Rudd has been married to his wife Julie for 18 years and they have two kids, Jack, 17, and Darby, 12.)

“She was stupefied,” Rudd said about wife’s reaction to the news. “But you know she was very sweet about it. After some giggling and shock, she said ‘Oh, they got it right.’ And that was very sweet. She was probably not telling the truth, but what’s she going to say?”

After saying his friends were going to give him “so much grief” for the title, he added:

“As they should. I would. I mean I’m going to lean into it hard. I’m going to own this. I’m not going to try to be like ‘Oh, I’m so modest.’ I’m getting business cards made. But all of my friends will destroy me and I expect them to. And that’s why they’re my friends.”

Finally, on how his life will change after the title:

“I’m hoping now that I’ll finally be invited to some of those sexy dinners with Clooney and Pitt and B. Jordan. And I figure I’ll be on a lot more yachts. I’m excited to expand my yachting life. And I’ll probably try to get better at brooding in really soft light. I like to ponder. I think this is going to help me become more inward and mysterious. And I’m looking forward to that.”

That signature sassy sarcasm that somehow makes him sound self-deprecating = SO DARN SEXY.

He said he had to read the email twice when he received the news, and his first reaction was “Oooh, get ready for outrage.”

But of course, there is no outrage because Paul Rudd is a perfect choice. He is *just* unconventionally sexy enough to keep the title interesting, but also totally, 100%, undeniably sexy. Nailed it, People.

And just to add one more fun bit to the mix, watch Stephen Colbert put Paul Rudd through a rigorous audition process to see if he was worthy of being named Sexiest Man Alive:

Which, of course, he is. In both mind and body, as Colbert so hilariously demonstrates:

Thank you, People, for finally acknowledging the obvious. And thanks for the #crushforlife hashtag that speaks for all of us.