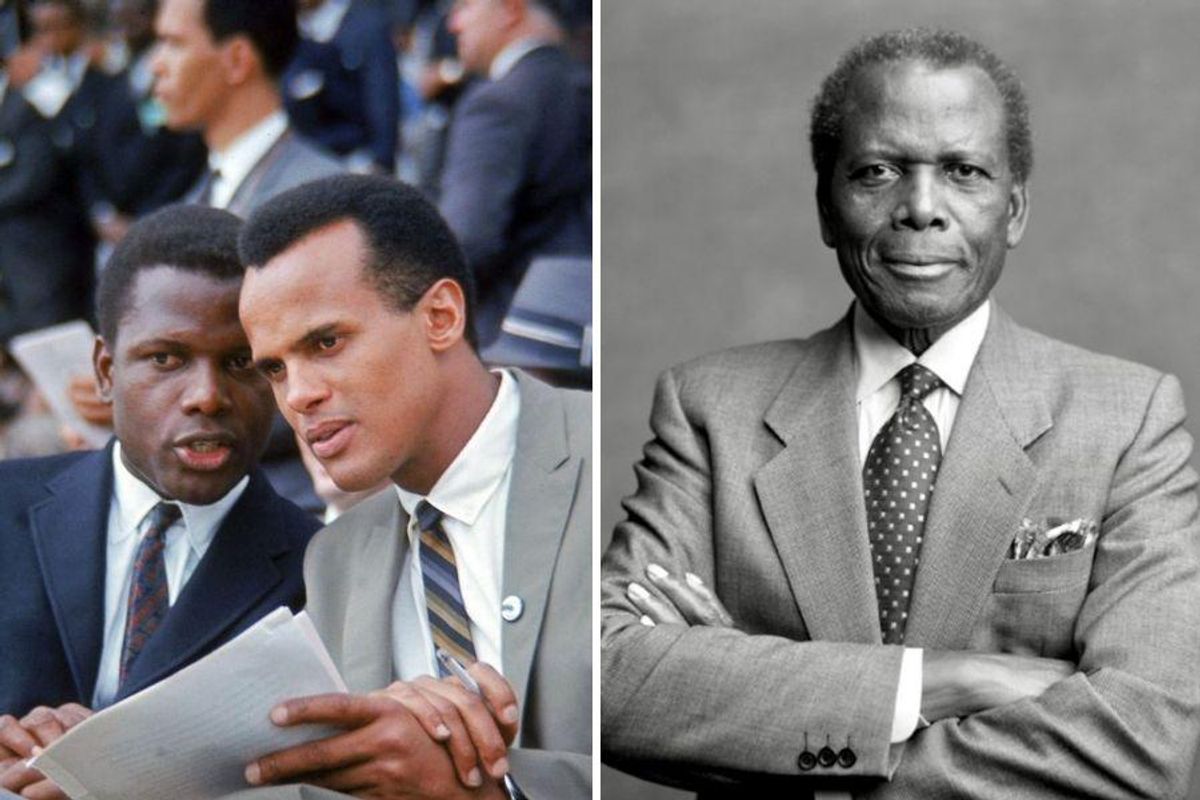 The world has lost a brilliant giant of a man, one who left an indelible mark on the entertainment world and society at large. Sidney Poitier, actor, director and civil rights icon, has passed away at age 94. The first Black actor to win an Academy Award, he was a trailblazer and barrier breaker, in addition to being undeniably charismatic in his signature, almost understated way.

Sidney Poitier was smooth without being smarmy, persuasive without being pedantic and stately without being snooty. He could command attention and respect with a thoughtful monologue or with a simple, unwavering gaze. He was uncompromising in his principles, speaking out for civil rights and turning down projects that didn’t align with his character and values. He was grace and dignity personified.

Born as the youngest of seven children in a tomato-farming family in the Bahamas, he went from having no electricity or running water to becoming one of the most renowned actors of all time. Poitier overcame all manner of obstacles, from poverty to racism, to gain his place in American history and the accolades he’s received are well-deserved.

Those who knew him personally are sharing their tributes to him today. May we all live lives that prompt such glowing praise of our person and our mark on the world.

Poitier and Belafonte at the March on Washingtonpic.twitter.com/4fOVBATxdL

Harry Belafonte and Sidney Poitier met in Harlem before either of them had made it big, and became lifelong friends. “For over 80 years, Sidney and I laughed, cried and made as much mischief as we could,” said Harry Belafonte in a statement to The Hollywood Reporter. “He was truly my brother and partner in trying to make this world a little better. He certainly made mine a whole lot better.”

Oprah Winfrey has often gushed about her appreciation of Sidney Poitier, from before their first meeting through the decades-long friendship they formed. “For me, the greatest of the ‘Great Trees’ has fallen,” Winfrey wrote in a statement shared on Twitter. “My honor to have loved him as a mentor. Friend. Brother. Confidant. Wisdom teacher. The utmost, highest regard and praise for his most magnificent, gracious, eloquent life. I treasured him. I adored him. He had an enormous soul I will forever cherish.”

Through his groundbreaking roles and singular talent, Sidney Poitier epitomized dignity and grace, revealing the power of movies to bring us closer together. He also opened doors for a generation of actors. Michelle and I send our love to his family and legion of fans.pic.twitter.com/zkYKFSxfKA

Tyler Perry shared a tribute on Facebook, writing, “The grace and class that this man has shown throughout his entire life, the example he set for me, not only as a black man but as a human being will never be forgotten. There is no man in this business who has been more of a North Star for me than Sidney Poitier.”

Actress Octavia Spencer shared the story of her meeting Sidney Poitier after she won an award. She was “shell shocked and sweaty,” but he stopped, smiled and congratulated her. “He told me he expected great things from me,” she wrote. “There’s something about hearing those words from a pioneer that changes you! Thank you, Mr. Poitier!! I’ve been riding high ever since!!

Former @disney board member Sidney Poitier was the most dignified man Iu2019ve ever met. Toweringu2026gentleu2026passionateu2026boldu2026kindu2026altogether special.pic.twitter.com/1ccPjqabkz

u201cIu2019ll be chasing you, Sidney. Iu2019ll always be following in your footsteps.u201dnnStill a timeless moment between Denzel Washington and Sidney Poitier at the 2002 #Oscars.pic.twitter.com/yCWSkIs7ww

“It was a privilege to call Sidney Poitier my friend. He was a gentleman and opened doors for all of us that had been closed for years. God bless him and his family,” Denzel Washington shared in a statement according to the Associated Press.

Poitier will be remembered and honored for his talent, wisdom and dignified forthrightness. There will never be another quite like him.

The legendary Sidney Poitier has reportedly passed away at 94. A true icon. nnHere is a powerful interview from him back in 1968 – he was addressing how he was being treated by the press. nnRest in power.pic.twitter.com/WtjmN2sU27