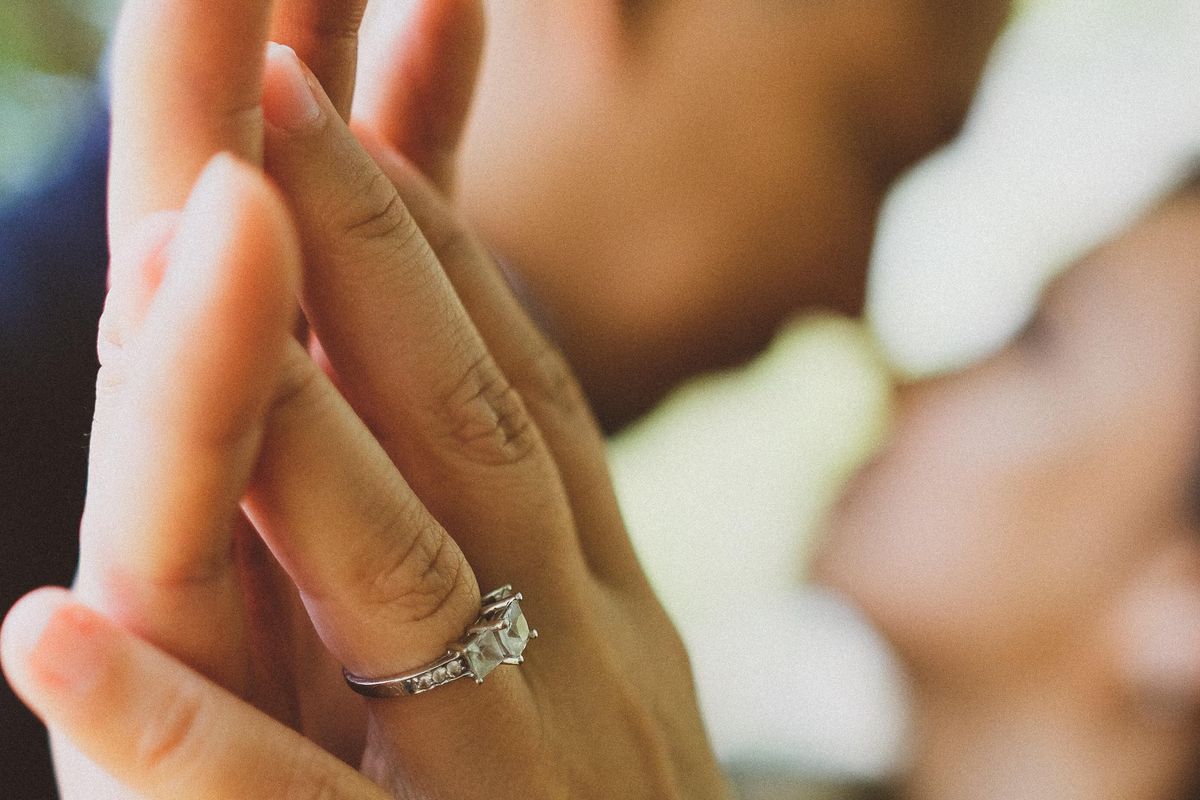 We’ve all heard the phrase, “a diamond is forever.” But as history shows us, that isn’t necessarily the case. In fact, having a diamond in a wedding ring is a fairly new concept, and it’s a brilliant lesson in the power of emotional marketing.

According to Weird History, proposing with a wedding ring dates back to the Roman Empire. Though, probably to no one’s surprise, the reasons for doing so were … less than romantic. Rather, simple bands were a symbol of a legal contract. On an even more unsentimental note, only women would wear rings, symbolizing a passing of ownership from father to future husband, thus marking this person as off the market, literally. How sweet. 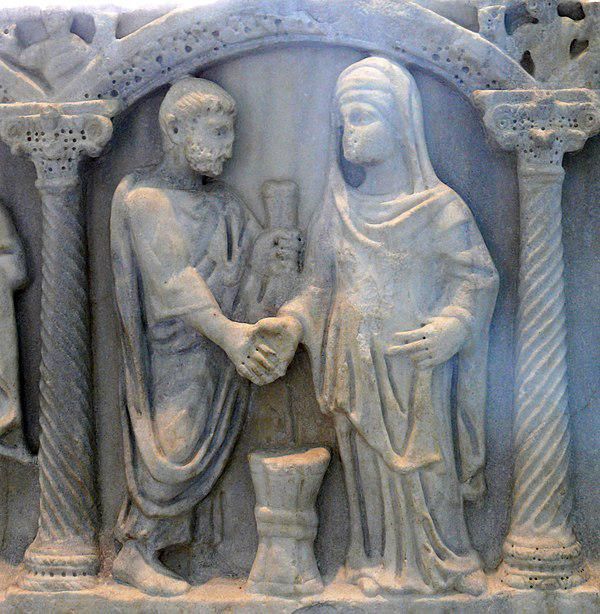 Roman women often received two wedding rings: one made of iron, and one gold. The iron ring, a symbol of strength, would be worn at home. The gold would flaunt affluence to the outside world. And just like today, the ring was worn on the fourth finger, because ancient Romans believed a vein ran from the finger to the heart. Weird History marked this as scientifically inaccurate, but there is a bit of nuance to be explored here. Traditional Eastern healing modalities (think acupuncture and reflexology), work with the concept of meridians, thought to be energetic channels through which life energy flows. The San Jiao meridian, also known as the “Triple Burner” or “Triple Energizer,” begins in the ring finger and passes through the chest to connect with the pericardium, the protective sac surrounding the heart.

So maybe—like many ancient civilizations—the Romans were aware of something we have since forgotten.

Once Rome fell, Europe continued the tradition of betrothal rings, but with a slightly more sentimental twist. Now wedding rings signified the promise of engagement. More like a pledge, less like a property statement. And the Roman Catholic Church first started to imbue the sense of faith, matrimony and divine union through the use of rings. Our modern-day sense of a ring symbolizing marriage vows began in this era.

Fast forward to 1477, during the engagement between Maximilian I, Archduke of Austria, and Mary of Burgundy. It was a marriage meant to bring peace and expand the Holy Roman Empire. Talk about a power couple. Mary of Burgundy was the first ever to receive a diamond in a wedding ring, starting a new trend throughout Europe. Ring makers everywhere brainstormed new and more impressive ways of cutting and setting the stones. You could say that Mary of Burgundy was a jeweler influencer, before it was cool.

Diamonds at this time were incredibly rare, and therefore incredibly expensive. Not until diamonds were discovered in Brazil during the early 1700s would prices finally drop. And once South African diamonds were found plentiful in the mid 1800s, the shiny stone began flooding jewelry stores everywhere, and for the first time, diamond wedding rings were made affordable to the middle class.

That is, until the Great Depression. 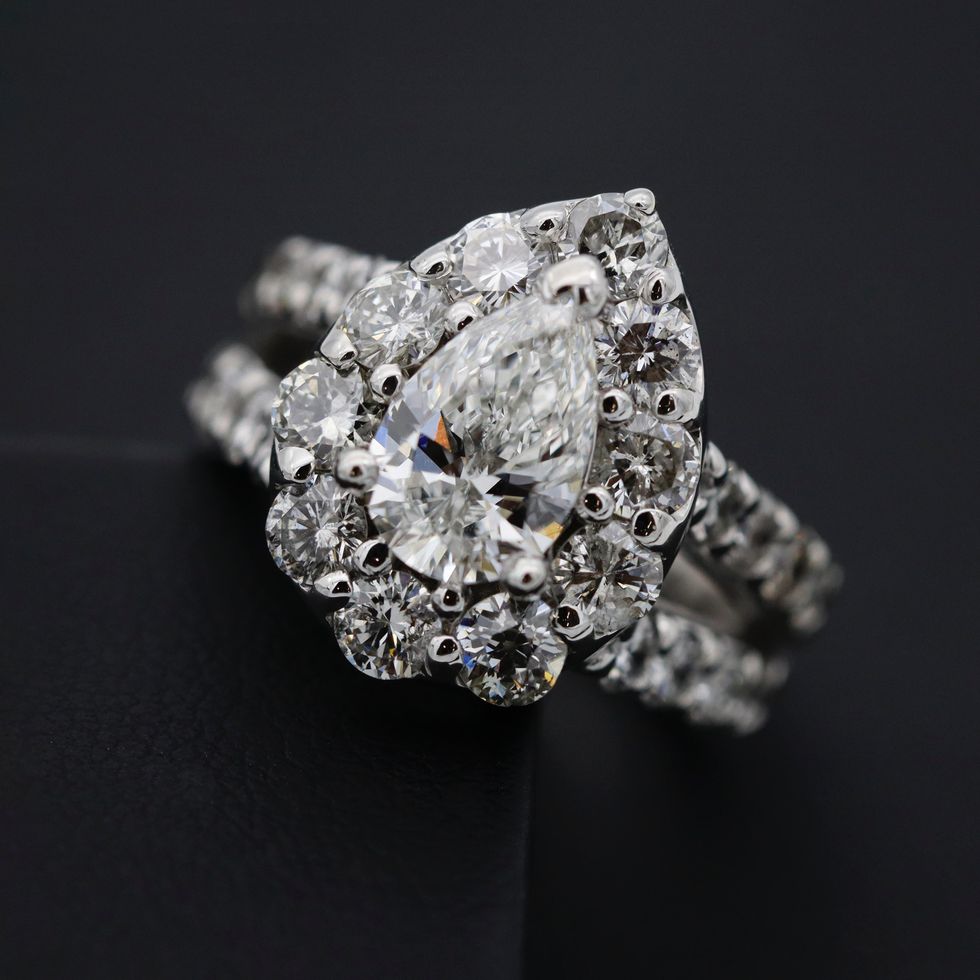 Financial devastation caused a crash in diamond ring sales. De Beers, the world’s largest diamond conglomerate, somehow couldn’t convince couples that spending what little money they had on an inanimate object to prove wedded bliss was a good idea. That is, until they began to capitalize on the idea of romance.

Using the power of glamor, De Beers bombarded the public with advertisements marketing diamonds as an investment in love, even having actresses pose in pictures to sell the idea (some things never change). Diamond sales skyrocketed 55%. So yeah, it worked.

From there, De Beers continued to entice potential buyers with the idea of bigger, better (read: more expensive) stones with even more ad campaigns. If diamond rings could somehow be synonymous with marriage, then diamond rings would become a necessity for holy matrimony. But how?

The answer is: with words.

This is where copywriter Mary Frances Gerety came into the picture. In 1948, Gerety was assigned to create a slogan that encapsulated the security and eternal romance guaranteed by owning a diamond. According to The New York Times, Gerety scribbled some words onto a piece of paper one night, and the next day presented it to De Beers. The paper read:

“A Diamond Is Forever.”

Gerety cast her spell, and it sold more than a million rings. By the 1960s, 80% of women in the U.S. owned a diamond ring. And it’s still an incantation De Beers uses today.

If there was ever any doubt on just how powerful words can be, let this story be an example.

The slogan might finally be losing its luster, as more and more couples are opting to use different stones, both for ethical reasons and to use different symbolism. For example, some might opt for a sapphire (signifying loyalty), while others might choose a ruby (for love and passion). Others still might do away with rings entirely. Two of my friends have tattoos on each of their ring fingers—the woman has a sun (her husband), and the guy has a moon (his wife). We live in a time where self-expression is making a renaissance, and it’s beautiful to witness. Tradition has its place, but, like with diamond rings, it’s important to know where those traditions are sourced from, in order to make empowering decisions.

For even more wedding ring knowledge, including the story behind Queen Victoria’s infamous golden serpent ring with emerald eyes, watch the full video below.