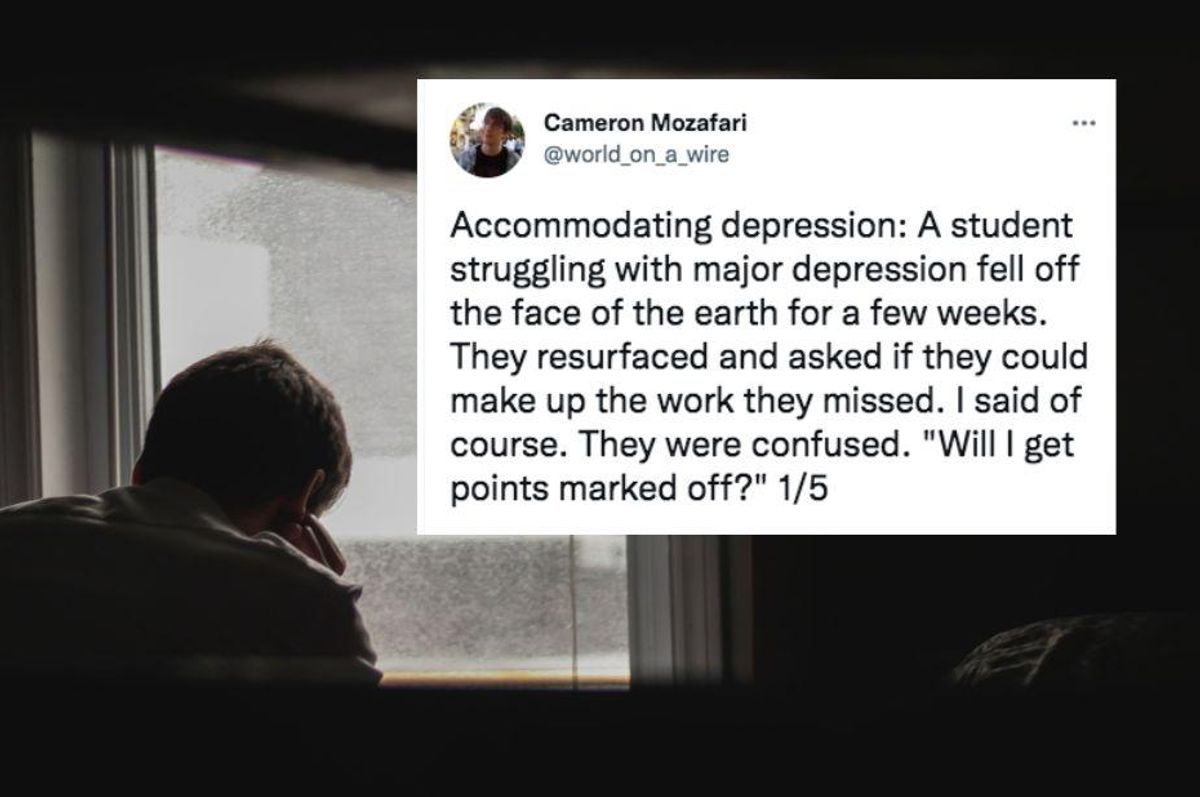 If you’ve ever battled anxiety or depression or have lived with someone who does, you know how debilitating it can be. No matter how much you want the brain to cooperate, sometimes it simply won’t, and it’s not possible to reliably predict when that’s going to happen.

I’ve spent years helping my college-aged daughter figure out how to best manage a severe anxiety disorder. She’s a bright young woman who really wants to do her best, but the anxiety monster in her brain makes that difficult. I’ve watched her knock out an impressive paper for a class in a short amount of time and I’ve watched her sit at the computer with a stack of sources struggling for hours to get her brain to put two coherent sentences together. Same person, same capabilities. It’s not that she doesn’t want to do the work or that she isn’t trying, it’s just that she’s in a constant battle with her anxiety monster, and sometimes the monster wins.

I liken it to a person who has a bum knee that gives out at random times. They may have exercises and therapies to try to keep it from going out, and some days they can walk around just fine. But they may have chronic pain people don’t see and sometimes things happen that can’t be predicted—a wonky staircase, a longer-than-anticipated trek, an icy sidewalk—that can throw things off and suddenly make them incapacitated.

No one with any sense of empathy would expect a person with an injured knee to keep walking. They’d understand that the person might need a wheelchair or walker or cane sometimes. They’d understand that it might take that person a little longer to get from point A to point B. They’d be sympathetic if the person needed to rest their leg a bit before being ready to walk again and wouldn’t bat an eye at the accommodations needed to help that person be mobile.

But unlike a visible physical injury or disability, mental health disorders aren’t always obvious. A person can seem “fine” from the outside but can be struggling in ways that make it nearly impossible to function the way they want to on the inside.

That’s why a Twitter thread from a college professor about accommodating a student struggling with depression is resonating with so many people. Cameron Mozafari, a senior lecturer at Cornell University’s College of Engineering, shared his thoughts on allowing students to turn in late work when they’re experiencing mental health struggles.

Mozafari described a student with major depression who asked if they could make up the work they’d missed after they’d disappeared for a few weeks. When he said, “Of course,” they were confused and asked him if they’d get points marked off. Mozafari said colleagues had chastised him for the leniency he shows students struggling with mental health, saying he was setting a double standard: “Everyone else has to get the work in on time, so why don’t folks in crisis?”

u201cI’ve had colleagues who have chastised my leniency with folks experiencing mental health problems. They say I am setting a double standard. Everyone else has to get the work in on time, so why don’t folks in crisis? 2/5u201d

Mozafari understands something those colleagues don’t, and he explained it perfectly:

“If my depressed student could do the work, I imagine they would. They, however, couldn’t. Because their brain blocked them from being able to do much of anything. Will they always be like this? Maybe. I don’t know. Will I still accommodate? Yes, why not?”

Bingo. If they could, they would. Trusting that students with mental health challenges really do want to do their best is such a simple but vital practice.

u201cThere’s this commonplace argument that college is supposed to prepare students for the “real world,” and teaching technical and professional communication really hammers that point. But here’s the thing: this is also the real world. Student is really depressed. For real. 4/5u201d

“The message we communicate to students when we don’t accommodate mental health issues is that the ‘real world’ won’t accept their mental illness,” he wrote. “Whether that’s true or not, I don’t know. But if it is true, that’s not the real world I want to usher any student into.”

The truth is that everyone’s “real world” experience is different, but no matter what defines the world we live in, empathy and kindness and understanding are always helpful, always appreciated and always on the table. Every single one of us has a role in creating the “real world”—so why did we decide that those who cling to harsh, cruel perspectives on humanity are the ones who get to make the rules?

u201cAddendum: To the folks posting “but what if they’re lying?” afraid of getting fooled, take a minute to read people’s responses here. Thousands of people who have struggled have responded with identification. If my goal is to help students in need, I think I’m doing that.u201d

The real world isn’t as awful as many people make out. My daughter has often lamented asking a professor for an extension on an assignment, but the vast majority of the time, they have been not only accommodating, but genuinely understanding. She has had professors who have opened up about their own struggles and who have sent her words of encouragement that helped counter the negative thoughts her brain throws at her.

One commenter pointed out that being given grace by a professor actually made them want to work harder—”I felt like someone believed that I was smart and capable and worth fighting for when I didn’t believe those things about myself”—and I’ve seen that reflected in my daughter as well.

u201c@amelieparent13 @world_on_a_wire Same. I turned in a paper late once. The standard was 10 points taken off per days late. I turned it in & my professor decided to waive the late points & give me a 100 because the paper was really good. She gave me time to do my best, it paid off for both of us. I was grateful.u201d

Another commenter pointed out that when people are having a mental health crisis, their work is usually one of the last things to go. So if someone is asking for accommodations, they’re in a state where they really are having a hard time functioning.

u201c@world_on_a_wire I feel like people must think that in a mental health crisis you are only ignoring your work. I can promise you that at my worst, I have let feeding myself, cleaning myself, moving my body all go before I finally let myself drop my work. “Not doing work” is never the only thing.u201d

Considering the fact that the median onset age for mental health disorders is late teens through early 20s, high school and college students need flexibility as they learn to manage their brain function. It can take time to find the right therapist and/or the right medications, and students ought to be given room for that while they’re also trying to get their education.

Extending grace and offering encouragement won’t bring the world to a screeching halt and it won’t create bad habits in people battling their own brains. Accommodating mental health struggles lets students know that they are seen and understood and that their teachers and mentors want them to succeed, which is a far more powerful and transformative message than old, tired lectures about the “real world.”