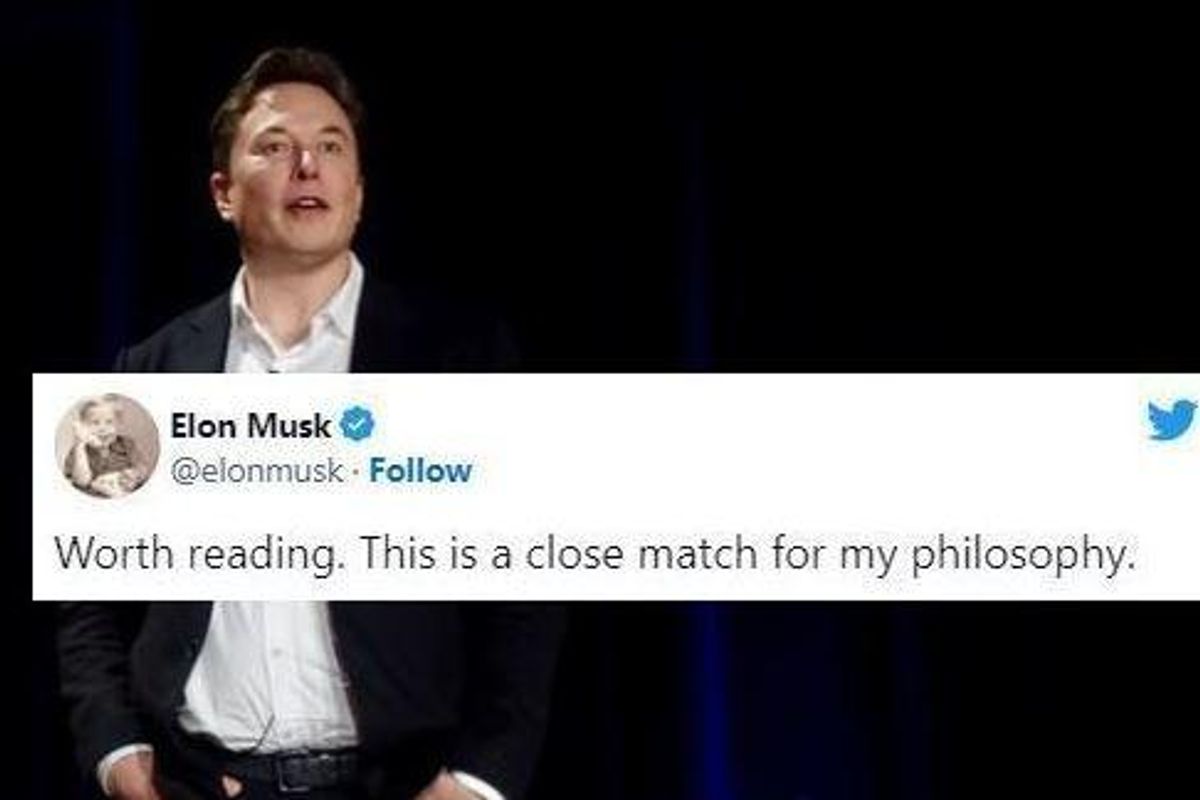 Elon Musk is the wealthiest person in human history because he changed how we send money and drive cars. He’s set his sights on taking humans to Mars and just bought Twitter, one of the world’s most powerful platforms for the exchange of ideas.

He’s loved by some, hated by others and, for the most part, a mystery to all. How can someone develop such an incredibly broad, positive vision for humanity while at the same time being able to reduce himself to a Twitter troll?

Three months ago, Musk gave a little insight into his inner world and what drives his decision-making. On August 1, he retweeted a plug for “What We Owe the Future,” a book by the Scottish philosopher and ethicist William MacAskill. “Worth reading. This is a close match for my philosophy,” Musk captioned the retweet.

MacAskill’s book is a call for the embrace of a philosophy known as “longtermerism,” which he defines as “the idea that positively influencing the long-term future is a key moral priority of our time.” He argues that we can make the future better in two ways, “by averting permanent catastrophes, thereby ensuring civilisation’s survival; or by changing civilisation’s trajectory to make it better while it lasts … Broadly, ensuring survival increases the quantity of future life; trajectory changes increase its quality.”

u201cWorth reading. This is a close match for my philosophy.u201d

The philosophy strives for the common good by focusing on the long-term goal of humanity’s survival. But long-term good may sometimes come at the expense of the short-term. “Because, the theory goes, giving a poor person a blanket isn’t likely to be as useful for the future of humanity as building a rocket to Mars,” investigative journalist Dave Troy writes on Medium.

Musk’s development of the Tesla fits right into the longtermer view of the world. “The fundamental goodness of Tesla … so like the ‘why’ of Tesla, the relevance, what’s the point of Tesla, comes down to two things: acceleration of sustainable energy and autonomy,” Musk said.

“The acceleration of sustainable energy is fundamental because this is the next potential risk for humanity,” Musk added. “So obviously, that is, by far and away, the most important thing.”

To achieve this goal, Musk had a long-term master plan that was an extremely rare thing in the auto industry. It was more akin to John F. Kennedy’s call to go to the moon than the auto industry’s usual vision, which is boxed in by quarter-to-quarter thinking.

Musk’s work to drive to normalize space travel and eventually colonize the moon and Mars fits nicely into the longtermerism theory as well. Musk has called interplanetary travel and colonization “life insurance” for the human species. While some focus on the medium-range goal of reducing the planet’s temperature, Musk is focusing on a possible future that may never come to fruition. However, aside from climate change, we may face other cataclysmic events that make Earth unfit for human life such as a meteor or ice age.

So why did Musk buy Twitter? Troy believes that the acquisition fits perfectly into the longtermer worldview.

“The goals are more ideological in nature,” Troy writes. “Musk and his backers believe that the global geopolitical arena was being warped by too much ‘woke’ ideology and censorship, and wanted to fix that by first restoring voices that had previously been silenced—and then implementing technical and algorithmic solutions that allow each user to get the experience they want.”

It appears as though Musk believes that the more regressive forms of progressive ideology work to stifle the spread of ideas and opening up the platform to all voices, regardless of how vile they may be, serves the ultimate goal of broadening human potential. Again, he’s sacrificing the short-term problems that stem from hate speech in favor of the potential for good ideas to emerge from the platform without being squelched.

Musk also alludes to longtermerism with his stated mission to “extend the light of consciousness.” If Musk believes that humans are the only truly conscious beings in the universe, our demise would effectively extinguish the universe’s knowledge of itself. The universe would be nothing more than the proverbial tree falling in the woods with no one around to hear it.

u201cIt is unknown whether we are the only civilization currently alive in the observable universe, but any chance that we are is added impetus for extending life beyond Earthu201d

The thought of the world’s richest, and potentially most powerful, man making world-altering decisions with no rhyme or reason is a scary proposition. It’s woefully inadequate to simply label Musk a visionary or a troll. But if he’s driven by a moral imperative, then we can get a better handle on the objectives behind his work and make sense of him accordingly.

The problem is, given his focus on results that won’t be apparent for generations, will we ever truly understand what he’s about?