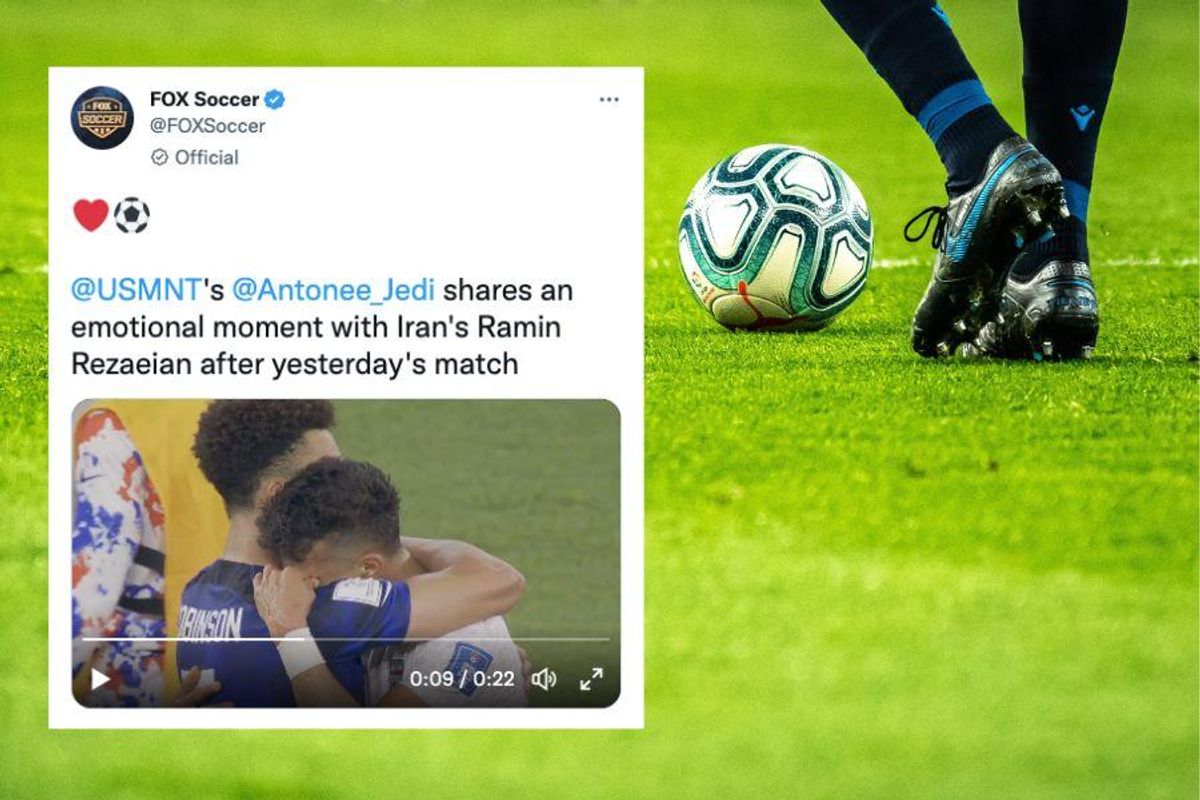 The lead-up to the 2022 World Cup match between the U.S. and Iran was filled with anticipation, as the teams battled for a spot in the final 16 and long-running tensions between the two nations on the political stage rose to the surface.

The Iranian team had some internal tensions of its own to deal with as players navigated the spotlight amid human rights protests in their home country and rigid expectations of their government. According to CNN, after refusing to sing the national anthem before its match against England on November 21, the Iranian team was reportedly called into a meeting with the Iranian Revolutionary Guard Corps and told that their families would face “violence and torture” if they did not sing the anthem or engaged in any other form of protest.

Hence, before the match against the U.S., the players were shown somberly singing the anthem. Then they got down to the business they were there for—trying to win (or at least tie) a soccer match to advance to the World Cup round of 16.

It was an exciting game, with the U.S. ultimately winning 1-0. But in the end, all of the intense competition and political tensions were superseded by some truly heartwarming acts of good sportsmanship and human kindness.

As the U.S. team celebrated victory and the Iranian team mourned defeat, it didn’t take long for players from the two teams to embrace one another in comfort and solidarity. Videos and images of the opposing team members arm in arm, hugging and crying together, show how sports bring people together regardless of their background.

In one video, U.S. player Antonee Robinson is seen approaching a clearly distraught Ramin Rezaeian, pulling him into a hug and speaking into his ear as the Iranian player let his emotions out.

“If we were playing any team—if it was England, Wales or anyone who we would’ve knocked out that day—and I’d seen another player crying, I’d like to think that I’d go over and console them,” Robinson told CBS News. “It didn’t really mean anything to me that the guy was Iranian—he was just someone that I’d just shared the pitch with in a really tough game.

“As a fellow human professional, someone who’s given everything the same way he has, it was just a moment of trying to console him and tell him he should be proud of what he’s done,” he added.

u201cLove this. USA beat #Iran but Josh Sargent & DeAndre Yedlin console Saeid Ezatolahi. nTim Weah, who also came over, sums it up: u201cwe grew up differently. He is still my family, he is still my brother and I love him the same way as the guys I grew up with.”u00a0#IranvsUSAu201d

After the loss, Iranian player Saeid Ezatolahi sat hunched over on the pitch, head in his hands as the tears flowed. Seconds later, U.S. players Josh Sargent and DeAndre Yedlin came to console him. Soon, fellow U.S. team members Tim Weah and Brenden Aaronson joined them, pulling Ezatolahi off the ground and embracing him with words of encouragement.

“I could feel the emotion from him on the ground,” Aaronson told Fox Sports. “It’s tough, it’s a tough moment for a lot of things. You put your heart and soul and I think he had a great game too, and a great tournament from Iran. It’s hard to see that from a player. All you want to do is go and console them and tell them that everything is going to be OK. It’s just a human thing.”

Weah told Fox Sports, “I think it’s more than just football. I think the United States and Iran have had so many issues politically and I just wanted to show that we are all human beings and we all love each other.

“I just wanted to spread peace and love and show him we come from different backgrounds, we grew up differently,” he added. “He is still my family, he is still my brother and I love him the same way as the guys I grew up with.”

Absolutely beautiful. When you strip away all the geopolitical stuff and the prejudices and conflicts between governments, we are simply one human family on this big flying rock, with far more in common than not. How wonderful to be reminded of our fundamental human connection on one of the world’s biggest competitive stages.